Aaron is a supporting character from The Prince of Egypt.

Aaron stays with Miriam and Tzipporah as Moses goes to the water. When Moses turns the water into blood through his staff, Aaron reacts in shock. Pharaoh, however, does not believe Moses's "trick" and demands that Moses abandons his mission. Aaron approaches Moses with sadness, hopeless that Pharaoh still has the power over their lives. Moses tells him to have faith, and promises that they will all see God's wonders in the coming days. 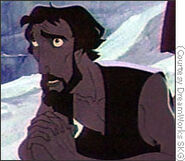 Moses's dream of Yocheved, Miriam, and Aaron saying goodbye
Add a photo to this gallery

Retrieved from "https://dreamworks.fandom.com/wiki/Aaron?oldid=68355"
Community content is available under CC-BY-SA unless otherwise noted.