Spirit Riding Free and it's other movies/short series

"Mine's Boomerang he's a goofball but I love him!"

Abigail Jezebel Stone is one of Lucky's friends and one of the main characters in Spirit Riding Free. She rides a horse named Boomerang. She has a younger brother named Snips. Abigail is silly but equally a lovable character, she is energetic, smart and often the most mature out of her two friends, she can also be quite sensitive.

Abigail enjoys crafting, horseback riding, talking, and giving animals cute names. She is not well traveled, having never been south of the Arrowroot Mountains. She has a younger brother, Snips. Her parents have been mentioned, but have not appeared in the show. She is always kind to her friends and despite being ditsy, she is actually clever. While not as brave as Pru and Lucky, she still has a brave side and always wants to do the thing she feel is the right thing.

Abigail is a very pretty young girl. She has short blond hair in a bob cut. She typically wears a white blouse shirt with leaf patterns on its short sleeves, blue plaid pants, and brown boots that have her barefoot underneath. Her eyes are blue. Sometimes she wears her hair in pigtails. 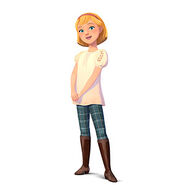 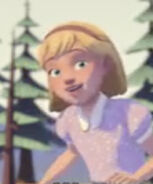