Ben Stiller performed the voice of Alex in Madagascar, Madagascar: Escape 2 Africa and Madagascar 3: Europe's Most Wanted, and Bernard in Megamind. and Carl in Turbo. In the flashback scene of the second "Madagascar" film, which reveals how Alex and his three best friends met, Ben's real-life then-toddler son, Quinn Dempsey-Stiller was one of two boys who voiced his father's character as a cub, the other being Declan Swift. This makes Ben Stiller one of two of the main voice actors any of whose children voiced their characters in their early years, the other being Jada Pinkett Smith, whose character, Gloria was voiced by her daughter Willow Smith as a calf. 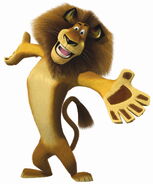 Retrieved from "https://dreamworks.fandom.com/wiki/Ben_Stiller?oldid=88127"
Community content is available under CC-BY-SA unless otherwise noted.