"Guess nobody told you: If you mess with the wolf, you get the fangs."

The Wolf Boss is Shen's military strategist second-in-command and possibly Shen's best friend. He commands an army of many wolves and uses them to finish Shen's weapon.

Nothing is known about his childood or how he became a guard at the Gongmen City palace. It is not known how he gained control of the pack. He lead he wolves to help Shen destroy the Giant Pandas. When Shen was exiled, the Boss and his pack went too.

He is a big wolf with dark gray fur and white back paws. He has a black mohawk that runs down his back. He wears Shen's symbol on his armor and fights with a huge spiked hammer. He is missing an eye, which is scarred when Po's father hits his face with his hammer.

The Wolf Boss and his pack spent 30 years hiding the mountains finishing the weapon for Shen after being exiled from Gongmen City. When the weapon needed more metal, Shen sent the pack to find more.They raided the Musican's Village and stole all the metal they could find. Po and the Furious Five showed up and fought with the wolves. The Wolf Boss howled and sent his troops into retreat. He hammered Po in the face after the symbol on his armor sent Po into a flashback. Shen move the pack back to Gongmen City after the weapon was done. He used it to destroy Master Thundering Rhino. The Wolf Boss arrested Master Ox and Master Croc and threw them in Gongmen Jail. The pack ran wild around the city until Po and the Five showed up again. The Wolf Boss reported back to Shen and told him a panda had survived their raid 20 years ago. Shen ordered the Boss to capture Po and the Five at all costs. When the Five broke free of their chains, Shen had to pack destroy the palace. When the boat fleet sailed for the harbor, Po, the Five, and Masters Shifu, Croc and Ox attacked the fleet. Shen ordered the Boss to fire the weapon and kill them. The Wolf Boss refused, not willing to risk killing his own brethren. In response Shen throws one of his sharp knives at Wolf Boss's chest and he fell to the deck, it is unknown either he survived the wound or if he was killed when Po destroyed the ships.

The Wolf Boss is very sarcastic and level-headed in a fight. He is extremely loyal to Shen and only disobeyed an order when the lives of his pack were threatened. He cares very deeply about his pack and defied Shen to keep them safe.

The Wolf Boss uses a spiked hammer in a fight rather than his claws. He feels more secure ganging up on a fighter with his pack. He relys on overpowering the enemy by brute strength and sheer force. He is an excellent fighter with his hammer and makes up for his lack of Kung Fu with the other members of his pack. 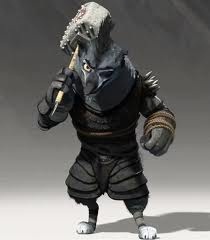 Add a photo to this gallery
Retrieved from "https://dreamworks.fandom.com/wiki/Boss_Wolf?oldid=32854"
Community content is available under CC-BY-SA unless otherwise noted.