Captain Underpants: The First Epic Movie is an upcoming American 3D computer-animated superhero comedy film based on the children's novel series of the same name by Dav Pilkey. Produced by DreamWorks Animation and Scholastic Entertainment, and animated by Mikros Image, it is being directed by David Soren, and produced by Mireille Soria and Mark Swift. The screenplay is by Nicholas Stoller. Dav Pilkey will be the executive producer. It features the voices of Ed Helms, Kevin Hart, Thomas Middleditch, Nick Kroll, and Jordan Peele. It is set to be released on June 2, 2017.[1]

DreamWorks Animation announced on October 19, 2011 that they had acquired the rights to make a film based on the series. DreamWorks had been attempting to secure the rights since the series was first published in 1997, but Pilkey wasn't interested.[2] However, after seeing "the subtle way that morality and personal responsibility were handled" in How to Train Your Dragon and the Kung Fu Panda movies, he realized a film could "properly convey what [he] was trying to do with the books".[3]

Captain Underpants is based on Dav Pilkey’s popular book series and centers around two scheming fourth graders, George Beard and Harold Hutchins, whose personal missions are to play pranks, hide in their secret treehouse and write comic books. But when they accidentally bring their favorite comic book character, Captain Underpants, to life through a hypnosis accident involving their megalomaniacal principal Mr. Krupp, their elementary school life becomes anything but elementary. 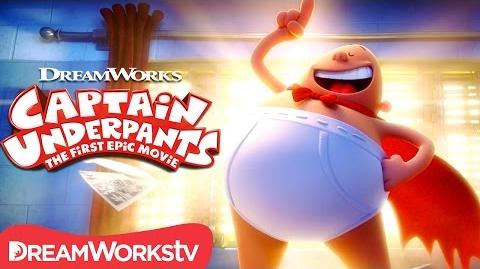 Retrieved from "https://dreamworks.fandom.com/wiki/Captain_Underpants:_The_First_Epic_Movie?oldid=88099"
Community content is available under CC-BY-SA unless otherwise noted.