Walken has also played the lead in the Shakespeare plays Hamlet, Macbeth, Romeo and Juliet, and Coriolanus. He is a popular guest-host of Saturday Night Live, hosting seven times. His most notable roles on the show include record producer Bruce Dickinson in the "More Cowbell" sketch; the disgraced Confederate officer Colonel Angus; and multiple appearances in the Continental sketch. He has also appeared in Hallmark Hall of Fame's Sarah, Plain and Tall (1991), which earned him a Primetime Emmy Award nomination.

Walken debuted as a film director and screenwriter with the 2001 short film Popcorn Shrimp. He also wrote and played the lead role in the 1995 play Him about his idol Elvis Presley. 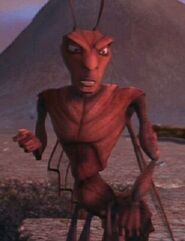 Colonel Cutter from Antz
Add a photo to this gallery

Retrieved from "https://dreamworks.fandom.com/wiki/Christopher_Walken?oldid=123139"
Community content is available under CC-BY-SA unless otherwise noted.