Dreamworks Animation Wiki
Register
Don't have an account?
Sign In
Advertisement
in: The Croods Characters, Reformed characters, Hybrids,
and 13 more

View source
watch 01:39
Hawkeye Is Here To Amaze - The Loop
Do you like this video?
Play Sound

The Croods
The Croods: A New Age

Chunky is a macawnivore and is a supporting character as well as the (former) main antagonist of The Croods. At the end of the film, he becomes friends with the Croods and Grug's pet. 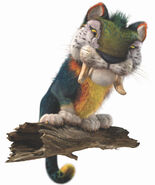