"On it!"
Clover is one of the main characters in the Netflix show, All Hail King Julien. As captain of the Ringtail Guard, Clover is tasked with protecting the king. Clover is always eager to put her skills to the test…maybe too eager.

Not much is known about Clover before the events of All Hail King Julien. What is known is that she was the captain of the Ringtail Guard, and that she was Uncle King Julien's personal bodyguard. Despite doing her job and being very capable at what she did, Uncle King Julien wasn't the most pleasant employer to work for (King Me shows that he never allowed her to implement many ideas, and Return of the Uncle King explains that he forbade her to speak unless spoken to).

Clover is a highly professional bodyguard. At first, she is stoic and entirely focused on her job, but she slowly starts to become more inclined to have fun. She is always battle ready when King Julien or one of her fellow lemurs is in danger from an outside force. Despite her goal in protection, however, she can often be the source of danger regarding the lower class. Since she is battle ready she always attacks someone (For example: Valentines Day: She punch someone for asking her for a dance her excuse: "Step inside the circle of comfort you get the paw", New Years: She punched someone thinking they had a knife (despite it being obvious). She is also bad at comforting people when she pointed out to Dorthy about her hut burning down she punched her out of embarrassment, this all change at Episode 5 where she accepts having fun over fear, thanks to Mort. 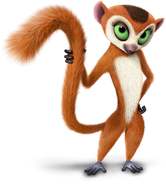 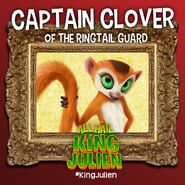 True Bromanc
Add a photo to this gallery
Retrieved from "https://dreamworks.fandom.com/wiki/Clover?oldid=134581"
Community content is available under CC-BY-SA unless otherwise noted.