David Lawrence Schwimmer (born November 2, 1966) is an American actor, producer, voice actor and comedian who has played in films such as Twenty Bucks, Duane Hollywood, Wolf, Crossing the Bridge, Breast Men, Kissing a Fool, and Apt Pupil. He is the voice, motion capture, and character model of Melman in Madagascar, Madagascar: Escape 2 Africa, and Madagascar 3: Europe's Most Wanted.

Schwimmer is married to Zoe Buckman, a photographer. They have a daughter together who is Cleo Buckman Schwimmer. 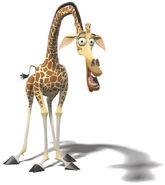 Melman from Madagascar franchise.
Add a photo to this gallery

Retrieved from "https://dreamworks.fandom.com/wiki/David_Schwimmer?oldid=92565"
Community content is available under CC-BY-SA unless otherwise noted.