Don Ira Feinberg is a character from Shark Tale. He is an elderly leopard shark.

Don Feinberg first appeared as a singer at the restaurant inside Don Lino and his gang's Headquarters, while singing a song about Lino's deceased son Frankie. As he finished the song, Lino thanks him for his composition until another member, the hammerhead shark Giuseppe, comes and tells Lino that Lenny was missing.

Don Lino: "Thank you, Don Feinberg, for honoring my son with your song."

Don Feinberg: "I've got some news, about the guy who took out Frankie."

Don Ira seemed to be another alpha of another gang of sharks that shared Lino's worries about Len's safety next to Lino's secretary Luca. He and Lino were very good friends, and it's possible that Feinberg also understands about the two young sharks.

Don Feinberg: (after finishing his song): Frankie, we'll miss you."

After that, the audience raised their cups to all honor the deceased one, and Lino thanks Ira for the song.

Also, not only friendly with Lino, Ira seemed to have a slightly self-confident side, as shown that he ignored the audience sharks' complaints of dissent when he asked whether he'll sing the Titanic theme song.

Don Feinberg: Any requests? How about that Titanic song?

Don Feinberg was portrayed by the late legendary Peter Falk inside the film adaptation of Shark Tale.

"Don Lino, at this most difficult time, please accept my deepest condolences."

"I've got some news about the guy who took out Frankie."

Feinberg farts, causing the orca behind him to faint.

"He's from the Southside Reef. That's all we could dig up." 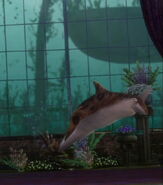 "Any requests? How 'bout that Titanic song?"

"How ya doin' pretty lady?" Feinberg flirts with Lola

Feinberg and the orca clown

Lenny leads the sharks along with Feinberg in dance moves

Lenny with the other sharks along with Feinberg
Add a photo to this gallery
Retrieved from "https://dreamworks.fandom.com/wiki/Don_Feinberg?oldid=124338"
Community content is available under CC-BY-SA unless otherwise noted.