Start a Wiki
watch 01:48
The Loop (Movies)
Do you like this video?
"Donkey" is the ninth episode of Father of the Pride.

To impress the kids in Hunter's class, Larry tells them that he's friends with Donkey from the Shrek franchise. He tries to get Donkey to come to Hunter's class, but Donkey refuses, so Larry hires a stunt double to pass off as him. 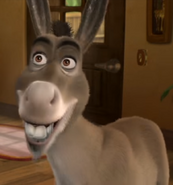 Add a photo to this gallery
Retrieved from "https://dreamworks.fandom.com/wiki/Donkey_(episode)?oldid=108832"
Community content is available under CC-BY-SA unless otherwise noted.