The Dreadtrux is a species from the Dinotrux series, presumably based on the Dreadnoughtus species of dinosaur with various engineering vehicle elements. They are accordingly massive Dinotrux, larger than any other species heretofore seen. 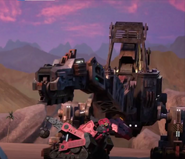 The Dreadtrux species makes is debut in "Dreadtrux, Part 1" and "Dreadtrux, Part 2", in which one is discovered sleeping beneath Mini Mountain in the Crater. In hopes of getting the creature out of the Crater and to an uninhabited area where it could feed, Ty and his friends made preparations to move it, unwittingly losing its Ore-encased egg in the process. Due to its hibernation, they were able to transport it out of the Crater and to a valley some distance away, though it began to awaken during transit. Unfortunately, it came fully awake due to the actions of a Poundersaurolophus, and soon began tearing though the landscape on its way back to the Crater.

Ty, his friends, and even D-Structs briefly halted its progress by raising the Bridge, only for the Dreadtrux to begin tearing up rock and dumping it into the chasm to form it's own bridge. Ty's group attempted to drive it back but were unsuccessful, only to be ignored by the creature when they made another attempt at halting it. Believing it to be looking for a supply of rare Ore upon which it fed, the Trux and their Reptool partners attempted to recover it while Ty and D-Structs formed an unlikely partnership to try and stop it. Fortunately, once Revvit recognized that the creature was in search of its egg-which was contained within the Ore-the creature was appeased and departed, its destination unknown.

The Dreadtrux later returns in "Bad Build", where it is located by D-Stroy and implemented by him and D-Structs in a scheme against Ty. After training it to accept his commands in exchange for helium Ore, D-Stroy joins D-Structs in attacking Ty and friends' builds. They then place disguised helium Ore amidst the building materials used by Ty's group, leading the Dreadtrux to attack their builds at D-Stroy's urging. The Trux initially attempt to stop the Dreadtrux, but with the threat of two T-Trux in addition they are forced to flee, and must also take an alternate escape route when the Dreadtrux pursues them to the Bridge.

In "Renegades", the Dreadtrux is seen napping near the Garage, still being used by the D-Bros. to enforce their will in the Crater. It also appears sleeping in "Opposites", with the Renegades being forced to leave behind a telescope rather than risking waking it up. In "Ankylodump Games" the Dreadtrux is unleashed on Ty when he is trapped in the canyon where the titular event is held.

In "Lil' Dread", an infant Dreadtrux is found by Ton-Ton; it is stated to not be the offspring of the adult Dreadtrux, which is referred to as "Big Dread" throughout the episode to distinguish the two. Ton-Ton befriends Lil' Dread, but its destructive nature proves to be a hazard to the Renegade Base. When he attempts to take it into the wild, it is captured by the D-Bros., but is later freed by the Renegades. Big Dread takes part in the pursuit of Lil' Dread, but gets trapped in a partially drained tar pit after Lil' Dread drinks much of it.

In "Ore Hunt", the D-Bros. lose control of the adult Dreadtrux after running out of their supply of helium Ore, due in part to their brief custody of Lil' Dread. They are soon locked in a race with the Renegades to find more, with the Renegades succeeding in acquiring it. Garby manages to get it to safety by eating it, and is then able to use it to lure the Dreadtrux across the Bridge and out of the Crater. In "Ty vs. D-Structs", Ty manages to befriend the Dreadtrux and convinces it to help the Renegades dig a secret tunnel into the Crater so as to confront the D-Bros.

Dreadtrux are said to hibernate for one hundred years at a time, so long that the material that accumulates around them can come to resemble small mountains or hills; their eggs can also apparently accumulate matter such as Ore. Upon awakening, they are said to rampage through various areas in order to consume massive quantities of Ore, feeding for months before returning to slumber. Their various features allow them to smash through solid rock of incredible thickness, process such rock in massive quantities, and stand up to attacks by multiple Trux at once. The only known physical weakness of the Dreadtrux is their feet, as their balance can be disrupted if they run over enough objects or have their feet pulled in different directions.

Dreadtrux seem to primarily eat helium Ore, though their system is capable of processing a number of materials including rock and wood. Lil' Dread demonstrated the ability to drink tar without harm, whereas other species of Trux are negatively affected by ingesting it. Helium Ore can also be used to train Dreadtrux to obey commands, though its obedience lasts only so long as it continues to be fed. However, it is also possible to befriend a Dreadtrux, at which point it will willingly offer assistance.