Dreamworks Animation Wiki
Register
Don't have an account?
Sign In
in: Rise of the Guardians characters, Rabbits, Characters,
and 9 more

“'I bet he's never met a rabbit like me. Six-foot-one, nerves of steel, master of Tai Chi'”
―Bunny in Jaime's room [src]

E. Aster Bunnymund, better known as Bunnymund or "Bunny," is a cool, calm Australian rabbit as dry as the outback. A natural ranger, he is an in-the-dirt, rough and tumble protector of nature. He follows nature’s rhythms and when it’s time for action, he waits for the perfect moment to act. And when he finally does, it’s all over in a heartbeat with the help of his enchanted boomerangs and exploding Easter eggs. Bunny is completely unflappable. The only thing that does get under his skin is North’s constant ribbing about how Christmas is more important than Easter. He has issues with Jack Frost which are later resolved and they become friends. Bunnymund's weakness is that he thumps his foot whenever he gets scratched behind his ear because that's his soft spot.

Bunnymund first appeared complaining about the cold weather when North called the Guardians to the North Pole to alert them about the uprising of Pitch. Bunnymund was annoyed by this since Easter was in 3 days and began to argue with North when he said that Christmas was more important than Easter.

As Bunnymund and North bickered and Tooth was busy giving orders to her fairy minions, Sandy noticed The Man in the Moon shinning from above. After many attempts to get the attention of the other Guardians, Sandy started to shake an elf (a bell was connected to its hat), successfully receiving attention. The Man in the Moon told the Guardians that Pitch had returned once again, resulting in a chosen new Guardian. Tooth asked them who could it be and Sandy suggested the Leprechaun. Bunnymund however started praying that new Guardian wasn't the Groundhog. When it was revealed that the new Guardian was Jack Frost, Bunnymund argued that Jack didn't care about children and preferred the Groundhog instead.

Bunnymund is later seen in an ally confronting Jack Frost after he lead him there. Jack asked Bunnymund if he was still mad about their last meeting which was the Spring 1968 but soon after Jack was thrown into a bag by North's Yetis. The Yetis asked Bunnymund about coming with them through the portal but Bunnymund refused and he opened a tunnel to take him back to the pole. The Yetis then shuffle Jack in to the magic portal teleporting him to North's Workshop.

At the Pole, Jack was impressed and curious as to why he was there. He was shocked to find that he was chosen to be a Guardian but he refused something that Bunnymund was happy for. Bunnymund thinks Jack doesn't know anything about bringing joy to children causing a fuss to start between him and Jack.

After Bunnymund told Jack that children believe in him and that Jack was invisible to them. North takes Jack away and explains to him about The Man in The Moon must have known that Jack has something special in him and North reveals his center which is Wonder. Jack, still confused, doesn't know what his center could be. Just then Bunnymund reveals there's trouble in Tooth's Palace and they have to make their way to help Tooth.

On their way there, it's revealed that Pitch has sent his Nightmare to catch all the fairies and collect the teeth of the children of the world. Jack saves Baby Tooth from one of the Nightmares before they arrive inside of the Palace to find a panicking Tooth. Pitch then confronted the Guardians and after a battle between them he escapes.

Soon after it's revealed that the children of Earth are losing hope in Tooth, North thinking fast comes up with a plan of them collecting the teeth and with Jack Frost aboard the Guardians start their quest. Soon after a competition between them started but when Tooth told them they were as fast at collecting teeth and leaving gift as her fairies, the guys remembered that they forgot to leave a gift and had to travel back around the world to leave the gifts.

The Guardians all gather in Jamie's room but caused an uproar that caused Jamie and his dog, Abby, to wake up and see them (except Jack). Abby starts growling at Bunnymund and Jamie tries to stop her. Jack wanting to have fun with Bunnymund, makes the alarm go off, causing Abby to attack Bunnymund and make him jump around the room. Sandy, trying to put Abby to sleep with his dream sand, ends up hitting everyone except Jack, Jamie and himself. Jamie flies out of bed when North lands on it and Sandy catches him, putting Jamie to sleep also. Then Sandy and Jack go to fight Pitch's Nightmares that have appeared outside Jamie's window.

Soon after Jack and Sandy are battling Pitch and his nightmares, Bunnymund joined in with North and Tooth but as the battle heats up, Pitch's Nightmares surrounds Sandy while Pitch took the opportunity to shoot him with an arrow made of nightmare sand, turning The Sandman into more nightmare sand. Jack, angry and horrified, charged at Pitch and creates an ice wave destroying the Nightmares.

The Guardians return to the Pole and do a memorial for Sandy. Knowing that they still can turn things around, the Guardians decided to help Bunnymund with Easter. Bunnymund got excited when North said that this time Easter was more important than Christmas and when North announced about going to the Warren Bunnymund said that since it was 'his warren, his rules' then opened a tunnel under everyone feet.

At the Warren, they find Jamie's sister, Sophie, who had used one of North's snow globes and was transported to the Warren. Jack used his special skills to make Bunnymund more relax and to open up to fun, so he could play with Sophie. After the eggs were ready, Sophie fell asleep and Jack decides to bring her home.

Soon after the Nightmares attacked the Warren, destroying every egg. Jack found them, but it was to late as Bunnymund tried to impress some children, it was revealed he had become invisible. When Tooth asked about Baby Tooth and where he get the Tooth Box and Jack stuttered for an answer other than he was with Pitch. Bunymund got mad at him and told the other Guardians that they shouldn't have trusted him. Bunnymund also revealed his center, hope, by saying that "Easter is new beginnings. New life. Easter's about hope, and now, it's gone." Jack, knowing he has lost the trust of the Guardians, left.

Later Bunnymund is seen with North and Tooth rushing to get the last light, Jamie. When Jack asked about Bunnymund, North revealed that Bunny has turn into a small bunny. Jamie laughed and asked what happened. Knowing that Bunnymund was tall and strong and now he was cute. Bunnymund thought that Jack made Jamie said that but Jamie revealed that Jack has actually helped him by keeping his belief in him.

Pitch soon appear and Jack goes to confront him. Making Bunnymund and the other Guardians to take Jamie away from Pitch but soon they find themselves in alley. Jack crashes down and revealed that Pitch was stronger. With the Guardians trapped Pitch started to approach them making Jamie tell Jack that he was scared. Jack got an idea and after hitting Pitch with a snowball they went to find Jamie's friend.

With the help from the other Guardians, Jamie's friends start to believe again. Pitch asks them who was going to protect the Guardians if the Guardians were protecting them. Jack reassured Jamie to not be scared since the Nightmares are just bad dreams and Jamie volunteered to protect the Guardians causing his friends to join him. Pitch then sends a wave of nightmare sand their way but once Jamie says, "I do believe in you. I'm just not afraid of you!" Jamie was able to turn the nightmare sand back into dreamsand. Which helps the Guardians get their full energy back and battle Pitch. North used his snow globes to bring his Yetis to help out while Bunnymund opened tunnels to get his Warrior Eggs to also help in the battle against the Nightmares while the Guardians confronted Pitch. Jamie gets an idea on how to revive the Sandman and told his friends about it.

As the battle with Pitch continued, the Nightmare King was cornered by the Guardians, but hid in the shadows and appeared behind a distracted Jack with scythe created of nightmare sand. Before he could hurt him the Sandman returns at the last second saving Jack from Pitch and uses his sand to give everyone good dreams and make more believers.

The Guardians and the children started celebrating and Jack hits Jamie with a snowball, which caused a friendly snowball fight. When Pitch woke up, he tried to make Jamie fear him again but found that Jamie was not scared of him anymore because he was able to pass through him. Pitch, afraid, retreats to his lair which caused the Guardians to follow and confront him one last time. After Pitch was taken away by his own Nightmare creatures, the Guardian ceremony was performed again. Jack looked at Jamie which caused him to nod. Proud of himself and of Jamie, Jack says, "I will," making him an official Guardian.

Bunnymund is seen saying goodbye to Sophie and saying that he will miss her. Bunnymund is later seen welcoming Jack on the sleigh, after Jack said his good bye to Jamie and Jamie gave him a hug. 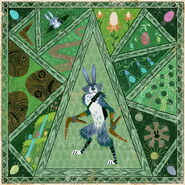 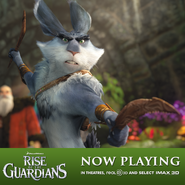 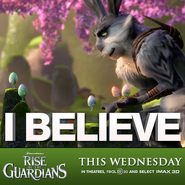 "Um, I'll take that back. The Groundhog's fine." 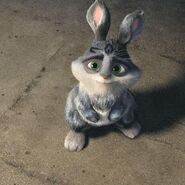