Dreamworks Animation Wiki
Register
Don't have an account?
Sign In
Advertisement
in: Rise of the Guardians characters, Males, Sidekicks,
and 5 more

The elves don't actually make the toys, North and the others just let them and the rest of the world think that. It's the Yetis that make the toys while the Elves "test" them.

Elves on T-shirts and baseball caps 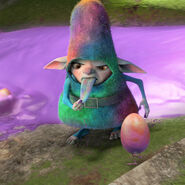 The elves are small little creatures with a red hat with a piont (a jingle bell at the top), covering their body all the way to the beginning of their legs. Their "body hats" tend to come in different shades of red, and around the elf's waistline is a belt that can come in different designs. There is a hole in the middle of this body hat, where the elf's face sticks out. There are also holes for the elf's pointy ears to stick out. The elf tends to wear a long sleeved shirt that can come in any color under their body hat. They also wear toeless, striped stockings, that also come in any color. The size of an elf would be about the size of half of your arm, even half of that perhaps. These little mischeiveous monsters also tend to have cute eyes, a scrunched up nose, and rosy cheeks, accompanied by a mouth with almost pointy teeth.

The elves were North's bandit band. They were cruel, vain and angry men but after they were returned back from stone, and transformed into small men they became silly and happy people.