"Fright Of Passage" is the sixth episode of Season 2 in the TV series, Dragons: Defenders of Berk.

Every 10 years Berk was plagued by attacks from a mysterious and frightening dragon called the Flightmare during the Aurora Borealis or known by the Vikings as Arvin Dale’s Fire. When Arvin Dale’s Fire struck, the Villagers would avoid being exposed and ran to their homes in fear of the Flightmare’s arrival. The young girl, Astrid does not cowar and is confident to confront the Flightmare herself, but his Uncle, Fearless Finn Hofferson that this not her fight…yet. He tells her to stay put and attempts to confront the dragon and stop it from attacking Berk once and for all. When the dragon confronts him, it begins to glow very bright and Fearless Finn becomes acting unusual. Just then, the dragon causes damages to the village before making its exit, the people who witnessed Fearless Finn confrontation with the dragon claimed that he was seemingly ‘froze’ with fear. Astrid becomes upset and shouts in anger hoping one day to avenge her uncle and her family name.

A decade later in the present, with only hours away until Arvin Dale’s Fire arrive, Astrid is seen sadisticly destroying several objects in the academy, training for her revenge thinking that she is ready. Snotlout increases her temper when he teases about her family name after the incident with Fearless Finn. Hiccup tries to tell Astrid that the Flightmare may not come this year, but is ruined when Fishlegs tells them that it does come every 10 years, he also tells the Flightmare’s appearance of being so terrifying that it freezes it’s prey with ‘fear’, the one that happened to Fearless Finn. Snotlout continues to joke about this, and Astrid brutally lashes out on him.

Just then the Twins arrive, bringing food supplies and mentions even more about the Flightmare and Astrid’s uncle despite Hiccup telling them to stop. Astrid just hurridly leaves, to avoid anymore stories about her Uncle’s past.

At sunset, Hiccup sees Astrid planning to set out and get revenge on the Flightmare, but Hiccup attempts to stop her by telling that it’s gonna take them all to stop it, but Astrid tells him that what if it never gets to Berk and tempts Hiccup to track down, learn and train the Flightmare, Hiccup replies that training dragons is not the only thing he does. Astrid does not believe him, and she is proven right when Fishlegs arrives to give Hiccup the research he asked for, it reveals the Flightmare’s location that it always starts on the Northern Swamp all towards to Berk with same route every time. Fishlegs advises them if they want to get closer to it they’ll have to be stealthy almost invisible, Astrid sees this as an advantage to achieve her revenge and tags along with Hiccup’s Night Fury to sneak up on the Flightmare.

Once Arvin Dale’s Fire appears, Gobber alerts the Vikings to go to their homes for their own safety. Snotlout and Hookfang pass by the villagers and overhears that some of them are going to an exclusive emergency bunker at the Academy created by the Twins. Snotlout is confident that he can squeezed in.

At the Academy, the Twins are already expecting people to arrive, Snotlout arrives first but the Twins tell him that he is not on the list and therefore cannot enter. The Twins tell him to leave with the help of Barf and Belch forcing him to, Tuffnut offers him a way to get in if they find everything they want on the list they give him to, Snotlout accepts and gets frustrated when he discovers Hookfang was also booked into the Bunker, so was Gustav.

Meanwhile, Hiccup and Astrid are attempting to go near the Flightmare but Hiccup advises to proceed with caution and see if there is anything to study about it and find a way to redirect it, if the plan falls apart they immediately leave, Astrid seemingly accepts. Once they arrive in the secluded swamp, the Flightmare appears and blinds Toothless with it’s bright glowing light, unable to get any closer. Hiccup decides to fall back, but Astrid is still determined to get his revenge and abandons them. Astrid, by doing what his uncle did, confronts the Flightmare and challenges it, with the same outcome, the Flightmare freezes Astrid. Unable to move, Astrid becomes an easy target and the Flightmare comes back for another attack, luckily Hiccup and Toothless manages to stop him, but Toothless gets blinded a bit.

Hiccup dismounts and drags Astrid to Toothless, they fall back to the clouds and blends in being unable to be spotted by the Flightmare, so it returns to its territory. Once the Flightmare returns, they land on the ground. Hiccup shakes Astrid in an effort to get her to move again, Astrid moves and they realize the mist she got sprayed on only temporarily paralyzed her,finally knowing that her Uncle was not actually frozen with fear. Hiccup decides to finally track the Flightmare and get it to redirect it by their own. They follow the Flightmare, and once they reach a river they discover it glowing.

Meanwhile, Snotlout delivers the Twins what they want by painting two chickens with different paint, pretending to be ‘Rainbow colored chickens’ getting them to be fooled by it. However though, the Twins tell him that he’s nearly there and assigns him to get a few more things they want. Snotlout frustratingly accepts. At Fishlegs’ home, Fishlegs is trying to figure out why the Flightmare always take the same route of the channel of the river in the secluded swamp to the village, when Fishlegs sees Meatlug still eating in a time of danger, he realizes it’s following it’s food: Glowing Algae, in which why the River Hiccup and Astrid comes across to is glowing. Hiccup examines the algae having a reaction to Arvin Dale’s Fire and concludes why it always goes to the same channel every decade. Just then, the Flightmare nears them and they hide, they discover it’s his main food source that sustains his glowing skin from being dull, it’s also the reason why it attacks anyone or anything that comes near it, suspecting they want his food.

Suddenly, the Flightmare spots them and attempts to mount quickly onto Toothless, but Toothless goes for a drink in the algae-infested river, and his body reacts by beginning to glow. Unable to hide from the clouds due to his skin glowing, they are continually pursued by the Flightmare and it blinds Toothless causing him to crash. Hiccup tells Toothless not to threaten the Flightmare, and they are almost confronted by it. Fortunately, Astrid distracts it and now she is pursued, Hiccup and Toothless quickly grabs her before barely being sprayed by the mist. They hide into a cave, and manages to loose him.

Just then Toothless’ glows wear off, and set off to follow the Flightmare. Astrid asks Hiccup how are they going to stop the Flightmare, it’s answered as Fishlegs brings Stormfly around as reinforcement. Hiccup and Fishlegs devises a plan to stop the Flightmare reaching Berk, by creating a new channel for the river in order to divert it’s route of going out to sea instead of going straight to Berk.

Back on the Academy, Snotlout, exhausted, brings every thing the Twins wanted even a sturgeon dressed as Stoick. But the Twins tell him that he has missed one thing on the list, a singing Terrible Terror. Snotlout is shock to hear that and takes another look at the list, and realizes the Twins are just adding more things on their list. But if Snotlout does not comply, this will result him of a permanent banishment to the bunker. Snotlout frustratingly accepts yet again. Meanwhile, Astrid quickly engages the Flightmare while Hiccup and Fishlegs attempt to dig up the new channel, Hiccup and Toothless continues to blasts the ground to construct the new channel to the sea, while Fishlegs attempts to block the original channel preventing it from flowing through Berk, the Flightmare sees this as a threat to its food and paralyzes Fishlegs. Hiccup and Fishlegs continues to create the channel while Astrid and Stormfly buys them some time, but she gets pinned down and retreats to Hiccup, in which they all fall back. The Flightmare continues to guard its food at any cost, Astrid suggests they feed their dragons with the Algae and uses it’s own defense mechanism against it. Outnumbered and outfirepowered, they manage to blind and disorient the Flightmare where it crashes down allowing them to finish off the channel out to sea. When the Flightmare regains control again, it discovers it’s food flowing outwards to see and desperately follows its food, ending it’s arrival of ever passing destructively through Berk ever again. The Riders return back to Berk.

On Berk, Gobber is asleep and Stoick awaits the Flightmares arrival, he claims to see it as a glowing figure begins to approach them and is shock to see there are three of them, he tells Gobber to wake up, and orders him to alert the villagers but Gobber tells Stoick to stand down as they are not Flightmares. They are surprised that there dragons are glowing, Hiccup tells them to explain later as he announces the good news that they manage to get rid of the Flightmare for the good, Stoick congratulates him proudly and tells the hiding villagers to come out as the danger their expecting has dissapeared.

As the villagers congregate out of their homes, Hiccup announces the incident with Fearless Finn, that Astrid’s uncle was indeed ‘fearless’ just like all of the Hofferson family, restoring Astrid’s family name and finally avenged her Uncle. Stoick tells them that they’ll finally get to watch the beautiful Aurora of Arvin Dale’s Fire freely for the first time. The Twins arrive also and they want glowing dragons, Tuffnut tells Ruffnut to put that on Snotlout’s list whenever he comes back.

Moments later at the Academy, Snotlout arrives finally bringing a Singing Terrible Terror, but shocked to discover it’s been cleared out after the announcement that the Flightmare has been declared gone. Snotlout responds by telling the Terror to stop singing, and is in deep frustration.

Meanwhile, the Flightmare flies towards the horizon as it’s food travels there also, finally having to eat it’s food and the Vikings of Berk to enjoy Arvin Dale’s Fire in peace, ending the 10 year plague. 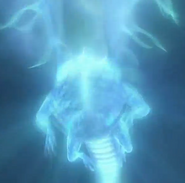 Retrieved from "https://dreamworks.fandom.com/wiki/Fright_of_Passage?oldid=91077"
Community content is available under CC-BY-SA unless otherwise noted.