Dreamworks Animation Wiki
Register
Don't have an account?
Sign In
Advertisement
in: Too many categories; don't add any more, Villains, Over the Hedge characters,
and 9 more

View source
watch 01:40
Boba Fett Returns - The Loop
Do you like this video?
Play Sound
This page has too many categories (>10). The redundant ones need to be removed.

Gladys Sharp is the former chairwoman of the Home Owners Association and Tiger's former owner and adoptive mother in the animated film Over the Hedge. She tries to kill RJ and his friends as she has a hatred for wild animals. At the climax, she and Dwayne are knocked into her yard by Vincent and the trio gets stung by the Depelter Turbo.

However, it is shown in the official PlayStation 2 video game for Over the Hedge that a year after the movie, she was not imprisoned and made it to rebuild her house and her normal life, despite all the shame towards the Depelter Turbo incident. Near the end of the game, she pursues the wild animals in a truck out of anger but will fail to catch them and crash into a house. Her ultimate fate after this is not revealed; it is only shown that she survived the accident. However, the game is non-canon to the film, and she was sent to prison.

Gladys has an intense disgust and hatred for wild animals; one reason is how they keep attacking her house and stealing her stuff. However, she seems to have no problem with domestic animals as she had a pet cat named Tiger.

Gladys is very strict with her H.O.A. rules and is constantly worried about animals "lowering her property values". 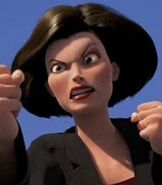 "Kill it!"
Community content is available under CC-BY-SA unless otherwise noted.
Advertisement