Dreamworks Animation Wiki
Register
Don't have an account?
Sign In
Advertisement
in: The Prince of Egypt characters, Characters, Magic Users,
and 12 more

Joseph: King of Dreams (debut and mentioned)
The Prince of Egypt

"I am that I am."
"I am the god of your ancestors, Abraham, Isaac, and Jacob."
God is a key religious figure and driving force in Joseph: King of Dreams and The Prince of Egypt. He is the Divine Spirit and Supreme Being responsible for the Creation of the Universe and all sentient beings that dwell from either of the two worlds: Heaven and Earth. He is the almighty God of Abraham, Isaac, and Jacob, the patriarchs of the Hebrew people.

God is abounding in love and wisdom. He is peaceful and magnificent but can also show his infinite wisdom, knowledge, strength, power and might to those that doubt Him. He is able to show His wrath to those that anger him. But God is compassionate, considerate and morally just, God is faithful to His believers and loves them like a Father loves his Children. Since God is love, the Angel of Death is the one that kills on His behalf.

God existed before time came into being, His origins are known only by Him, billions of years after God had created the Earth, the world entered into darkness, His people entered into the worship of false deities and lived immoral and corrupted lives. He chose Abraham's descendants 'The Hebrews' to be an example of morality and spiritual truth to the future generations. Through Abraham, God raised up Prophets from his descendants to act as intermediaries between Himself and Man. God raised many prophets throughout time who all prophesied in his name, showing the Hebrews the path to God.

God protected Joseph throughout his life, watching over him and guiding him. During Joseph's life, Joseph was sold to Potiphar. Joseph got sent in prison and prayed to God for help. God heard Joseph's prayer and answered him. With the power of God's Divine Influence, Joseph become an advisor to Pharaoh Rameses I due to his ability to interpret the meaning of dreams, which no other person in the Land of Egypt could do. Joseph interpreted the mysterious dream Rameses dreamt and told him to prepare for a coming seven-year famine. Joseph was made in charge of the preparations for the coming famine. Once Joseph's people came, they rested in Egypt until a hundred years later when Rameses' father Pharaoh Seti I came to power and enslaved the Hebrews.

When Moses ran away from Egypt after learning that he was not an Egyptian but in fact a Hebrew, he ended up in the Land of Midian, where he married Tzipporah, daughter of Jethro.

Moses was tending the flock of his father-in-law, Jethro when he found himself in cave where he saw an amazing sight. A Burning Bush, but this Fire was not natural fire it was God speaking through the Burning Bush Manifestation of an Angel. God told Moses that "He had heard the cries of his children" He told Moses that he would be his messenger and intermediary for the Hebrews. After God reassured him and took his doubts away, Moses accepted the task God had gave him, God shows his might to both the Hebrews and Egyptians through the wonders of the devastating plagues. The last wonder God did, was sent the Angel of Death to pass over Egypt and take all the First-Born of the Egyptians. God told the Hebrews to paint lamb's blood on the entry of their homes so that the Angel of Death would see that the people whose house it belonged to were not Egyptians and pass over.

God closed the high walls of lifted water and the soldiers all drowned, leaving Rameses on the shore in bitter defeat. Finally, on Mount Sinai, God gives Moses The Ten Commandments as a moral guide for the Hebrews and later on for the world to live by, God no longer uses Prophets to guide people to him, his Spirit influences the lives of people today and brings them out of evil into goodness and darkness into light.

The silhouette of a human form can be seen in the image, which was designed to look like the Angel of Death itself. 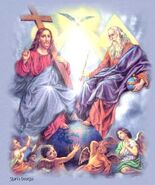 Jesus Christ at the Right Hand of God.