Enemy, taker (both false)
Gorg Father (true, as seen in the credits) K-trong (in Adventures with Tip and Oh)

Gorg Commander, also known as The Gorg, is an anti-hero, later supporting protagonist in the 2015 film, Home. He is the leader of the Gorg.

Gorg Commander was mentioned earlier on the film, but first seen in a flashback with Captain Smek escaping from him and stealing the egg.

Gorg Commander appears later on seeing the invitation that Oh sent and starts to destroy Boov until one of his mini ships were controlled by a microchip that controls it so Oh decides to use to stop Gorg Commander, but Gorg Commander starts to break earth apart but Oh shows him the egg which made him stop, coming out of his mothership and showing his true good nature, and revealing that he is actually a small starfish-like alien.

Apparently, the Gorg did not come to Earth because of Oh's invitation, but it was because of the egg itself, as it apparently had a homing beacon in which he tracked and followed the Boovs with. While all this time, he wanted the egg that Smek stole from him. It turns out he was the last Gorg in his species, near the end he starts dancing with his children, as well as attend Oh's party on Earth, which he would have if the invitation had reached him. 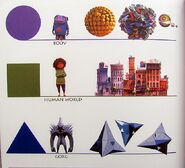 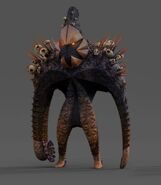 Retrieved from "https://dreamworks.fandom.com/wiki/Gorg_Commander?oldid=83191"
Community content is available under CC-BY-SA unless otherwise noted.