"Being a hero is for losers!"

"Pretty sneaky sis? There's one person I know who calls this town Metrocity: YOU!"

"You're so pathetic. No matter what side you're on, you're always the loser."

Hal Stewart (later known as Titan, or Tighten) is the main antagonist in Megamind. 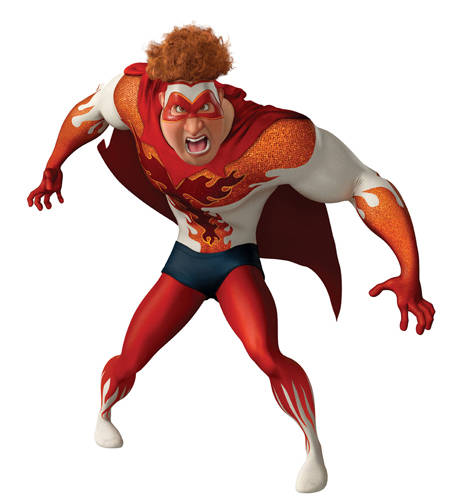 Tighten goes to Roxanne and attempts to woo her, but his recklessness and inability to use his power properly causes her to nearly be killed a number of times. After revealing who he is to her, Hal is spurned by Roxanne. Upon later seeing her dating Bernard, who is actually Megamind, Hal gives up on being a hero and decides to use his powers for his own personal gain. Megamind goes along with his plan to face Tighten but when he never shows up and arrives at his apartment to find him playing videogames, Megamind also sees he has stolen several objects and wishes to become a villain. Disgusted, Megamind reveals to Tighten that he's been tricking him as well as being the man Roxanne dated, causing their battle to go along and Tighten saving the day, as Megamind hoped. However, this doesn't change Tighten's decision to become a villain, as the battle only increased his rage, and unlike Metro Man, Tighten has no problem outright trying to kill Megamind, forcing him to flee. Megamind uses a copper sphere, having learned it is Metro Man's weakness on Tighten, but it has no affect, being the first clue Metro Man is alive and that he only faked his death to retire being a superhero and pursue a musical career. Once Megamind flees, the citizens of Metro City congratulate Tighten for freeing them from Megamind, but he reveals his own evil intentions of domination as Metro City's new villain ("I wouldn't say 'free', more like 'under new management'), starting off by violently flicking the Mayor off with his finger, much to everyone's shock.

Without hesistation, Tigthen starts to terrorize Metro City as its new villain by flying around and using his laser beams to create havoc in the streets and buildings, causing so much damage to the city than Megamind has ever done. Feeling extremely remorseful for letting this happen as well being the failing villain, Megamind turns himself back to prison to pay the price, and Roxanne, having no more leads, attempts to talk to Tighten and get to his conscience. Unfortunately for Roxanne, Tighten denies that he's got any good in him out of spite of being spurned by her, kidnaps her, and ties her up in the top of Metro Tower, forcing Megamind out of hiding by threatening to kill her. Determined to take responsibility for his actions, Megamind escapes form prison (with the help from Minion) and formulates a plan into saving Roxanne and Metro City.

As part of the plan, Minion disguises himself as Megamind to save Roxanne from the falling tower, while the real Megamind disguises himself as Metro Man to verbally berate Tighten for his actions and scare him out of the city and reveal himself to the city. The plan seemed to work, though Minion ends up being stabbed by Tighten with the tower's rod, while Tighten finds out he was tricked when "Metro Man" mispronounces the city as "metrocity" something only Megamind does. Tigthen then engages into a final fight with Megamind, but only this time, Megamind refuses to flee. It was then Megamind finally located the Invisible Car that holds the Defuser Gun that gave Tighten his powers. Though Megamind finally manages to get hold of the weapon, Tigthen violently throws him up into the sky, hoping him to fall to his demise. Fortunately, Megamind took the opportunity to dehydrate himself to land in the water fountain, where Tighten intends to finish Roxanne. Upon Megamind falling into the water and rehydrating himself, he activates the Defuser Gun to removes of Tighten's powers, reverting him back to Hal for good.

As Megamind becomes the city's new hero and Roxanne's boyfriend, Hal is thrown into Megamind's former cell as punishment for his actions. He is last seen singing to Bad by Michael Jackson.

Retrieved from "https://dreamworks.fandom.com/wiki/Hal_Stewart?oldid=36968"
Community content is available under CC-BY-SA unless otherwise noted.