"I wouldn't kill him, because he looked as frightened as I was. I looked at him, and I saw myself."

Hiccup Horrendous Haddock III is the main protagonist in the  How to Train Your Dragon series.

At the start of the film, Hiccup was 14 years old and embarrassment life to his father, Stoick the Vast, the chief of the Hairy Hooligan tribe. Too small to wield traditional Viking weapons and therefore unable to kill a dragon like the rest of his village, he works as an assistant to Gobber the Belch, the village Blacksmith. One night during a dragon raid, Hiccup leaves his indoor workpost and, with a bola sling named "The Mangler," manages to shoot down one of the deadliest and most feared dragons in the skies: the Night Fury. As no one has ever seen a Night Fury, no one believes Hiccup to bring one down.

When he goes to find his kill the following day, he discovers that the dragon is still alive. Despite his determination to prove himself to the community as a bona fide dragon killer, Hiccup is unable to kill it after seeing the fear in its eyes, and instead opts to free it.

Meanwhile, Hiccup is enrolled in Viking training, where he's expected to learn to fight and kill dragons. At first, he struggles to complete the simplest tasks and hold his own against even the most (relatively) benign dragons, earning the mockery of his fellow teenagers. However, after managing to get close enough to bond with the Night Fury he shot down, which he names Toothless after his retractable fangs, he gains valuable experience and deeper insight into the mannerisms of most dragons, such as the fact that it's possible to scratch a dragon into submission if it's scratched gently under the chin. He's soon hailed a Viking prodigy, the time he spends with Toothless allowing him to ultimately keep every dragon he encounters during training at bay.

The stress of living this double life is hard on Hiccup, however. The other Vikings, particularly Astrid, take notice of his unexplained absences after dragon training sessions. Eventually, Astrid follows him and discovers Toothless. She runs off to tell the other Vikings, but Hiccup and Toothless stop her, flying her around the area on Toothless to calm Astrid down. It's during this ride that Hiccup sees the Red Death in the very Dragons' Nest his father has been dying to find and destroy. When they land, Astrid kisses Hiccup for the first time and admires his loyalty to Toothless when he refuses yet again to tell the village about the Dragons' Nest and his bond with Toothless.

Soon, Hiccup has to fight and kill a Monstrous Nightmare as part of his final exam during dragon training. The task goes horribly wrong, however: when Stoick swings his hammer against the dragon training cage in response to Hiccup's blasphemous claims that dragons are good creatures, Hiccup's methods of dragon appeasement no longer work and the Nightmare moves in for the kill. Toothless, hearing Hiccup's scream, rushes to the scene and beats the other dragon back while at the same time revealing himself to all the Vikings. Though Hiccup attempts to explain why he went against the Viking way of life and befriended a dragon, his father fails to listen, disowns him as his son, and instead takes advantage of Toothless, chaining him to a ship and using him to reach the Dragons' Nest. As the adult Vikings leave in search of the Nest, Astrid encourages Hiccup to use his brains and do "something crazy". Astrid gathers the other Viking teenagers as backup, and Hiccup teaches them how to ride on the back of a dragon. They follow the adults, arriving just after the Red Death emerges from the Nest.

After freeing Toothless from his chains where his son could'nt, Stoick tells his son how proud he's of him just before Hiccup and Toothless fly off to confront the Red Death themselves. Hiccup manages to kill the Red Death by having Toothless shoot fire through its wings in mid-flight and nosedive toward the island so it can't pull up in time and crashes into the ground, its own flame triggering an explosion on impact. Hiccup and Toothless run into the Red Death's tail as they attempt to escape the resulting blast, however, and the two fall thousands of feet into the blaze below. As the village approaches the site of the explosion and finds that Hiccup is nowhere to be found, Stoick looks up to discover that, even without his makeshift tail, Toothless protected the Chief-to-be from the blast by folding him in his wings.

Hiccup is heralded as a hero in the tribe. Although he lost part of his left leg in the battle, he's fitted with a prosthetic that matches Toothless's makeshift tail. At the very end of the film, Astrid kisses Hiccup on the lips, this time seemingly as boyfriend and girlfriend, as the rest of the village accepts dragons onto the island as pets and companions.

Hiccup seen at the end of "How to Train Your Dragon" and on "Dragons: Riders of Berk"

Hiccup as he'll appear in "How to Train Your Dragon 2"

Hiccup about to kill Toothless

Hiccup attacked by a dragon 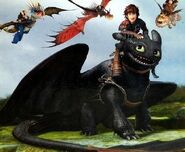 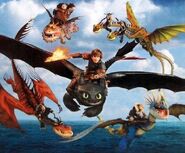 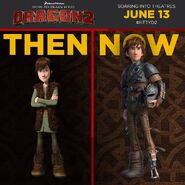 Retrieved from "https://dreamworks.fandom.com/wiki/Hiccup_Haddock_III?oldid=42542"
Community content is available under CC-BY-SA unless otherwise noted.