The film received widespread critical acclaim and was a box office success, grossing $621 million worldwide against it's $145 million budget.

Five years after the Vikings of Berk have made peace with the dragons, dragon riders participate in a race. Hiccup goes on adventures with his best friend Toothless, as they discover uncharted lands and new territories. Hiccup and Astrid investigate an ice formation in a newly discovered island where they meet a dragon trapper named Eret who has been capturing dragons for an insane conqueror called Drago Bludvist. Hiccup and Astrid return to Berk to warn Stoick the Vast about the dragon army that Drago is building. Stoick orders the villagers to prepare for war but Hiccup and Toothless fly off to try to reason with Drago. Stoick, Gobber and the other dragon riders follow Hiccup and Astrid who has made themselves prisoners of Eret in an effort to get to Drago's camp. In the ensuing argument between Stoick and Hiccup, the latter decides to disobey his father and flies off with Toothless in a fury. He is then captured by a dragon rider named Valka, who is revealed to be Hiccup's long lost mother. She explains that the dragons answer to an Alpha dragon called a Bewilderbeast, who has made an island made of ice to be a safe haven for all dragons.

Stoick tracks Hiccup to this island where he discovers that his wife is still alive. Drago has also tracked them to the island where he unveils that he has his own Bewilderbeast. A titanic battle then ensues between the two Bewilderbeasts in a challenge for the control over all dragons on the island. Drago's Bewilderbeast emerges victorious thereby controlling and capturing all the adult dragons, including Toothless, Stormfly, Meatlug, Hookfang, Bark and Belch, Skullcrusher, Grump, and Cloudjumper. Drago orders his Bewilderbeast to kill Hiccup which then decides to send Toothless instead. Drago leaves Hiccup to his fate as he prepares his now larger army for the invasion of Berk. Stoick and Valka sees Hiccup in trouble and rushes to rescue him. Toothless fires at Hiccup, but Stoick pushes him out of the way and is shot himself. Valka rushes over to Hiccup and Stoick, but solemnly announces that Stoick has died. Toothless, having snapped out of hypnosis, attempts to help Stoick but is chased away by an enraged Hiccup. Toothless is then controlled again by Drago, who rides Toothless to lead the invasion of Berk. Hiccup, now filled with regret at the loss of his father and his dragon, decides that he will fly back to Berk to defend his own, like his father always taught him.

The dragon riders return to Berk while riding baby Scuttleclaws as babies are immune to the Bewilderbeast's hypnosis. The group finds Berk completely frozen just as Drago's Bewilderbeast begins its attack on the village. Hiccup confronts Drago and a brainwashed Toothless while the other riders work together to distract the Bewilderbeast. Drago is surprised to see Hiccup still alive and orders Toothless to shoot Hiccup again, promising that he will not miss this time. Hiccup attempts and succeeds in disenchanting Toothless, much to Drago's surprise, who immediately orders his Bewilderbeast to try and regain control of Toothless. However, Hiccup blindfolds Toothless to prevent the Alpha from controlling him again. Drago orders his Bewilderbeast to shoot Hiccup and Toothless once more, and successfully freezes the both of them in a big blast of ice, seemingly killing them. As Valka and the villagers of Berk grief over their apparent death, Toothless, now glowing with plasma charge, blows the ice up, revealing that he and Hiccup are safe. An enhanced Toothless challenges the Alpha Bewilderbeast for control over all dragons. However, all the dragons have freed themselves from the Bewilderbeast's control and joins the people of Berk in a final standoff against Drago and his dragon. Toothless and all the other dragons fire simultaneously at the Bewilderbeast, severely injuring the latter and causing it to lose its left horn in the process while Drago's mechanical arm is also destroyed. Defeated, Drago and his Bewilderbeast retreat into the ocean as the villagers celebrate their victory. Toothless is now crowned the new Alpha of the dragons.

Hiccup is officially appointed chief by Gothi the Elder as Gobber proclaims that the chief has finally come home, gaining cheers from the villagers. Astrid, happy that Hiccup has finally found what he was searching for, kisses him. Hiccup seeing that his father's dragon Skullcrusher now needs a new rider, allows Eret to be the one to take care of him. As Hiccup does the closing narration, Berk is seen being rebuilt with a statue of Stoick erected in his honor while Hiccup is seen doing his duties as the new chief of Berk. The film ends with a dragon race while Hiccup proudly declaring that, while others may have armies and armadas, Berk has their dragons. 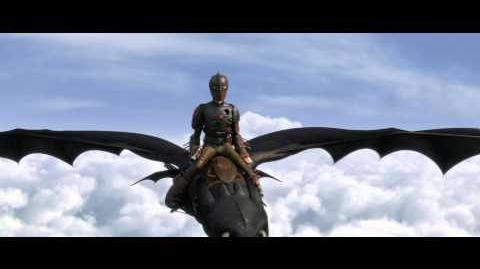 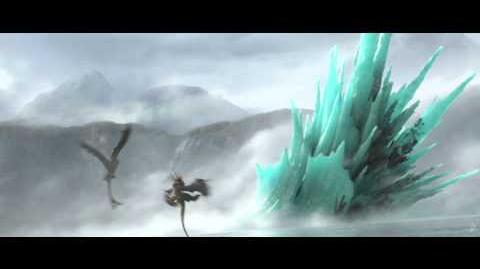 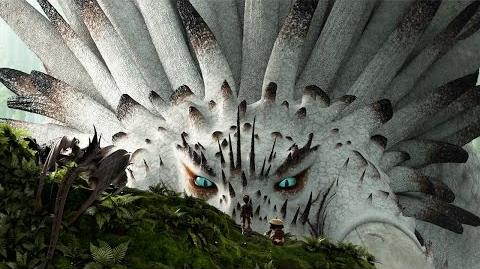 DreamWorks Wiki has a collection of images and media related to How to Train Your Dragon 2.

Retrieved from "https://dreamworks.fandom.com/wiki/How_to_Train_Your_Dragon_2?oldid=79596"
Community content is available under CC-BY-SA unless otherwise noted.