Start a Wiki
watch 01:27
The Loop (Movies)
Do you like this video?
Ian McKellen performed the voice of The Toad in Flushed Away. His career spans genres ranging from Shakespearean and modern theatre to popular fantasy and science fiction. He is the recipient of six Laurence Olivier Awards, a Tony Award, a Golden Globe Award, a Screen Actors Guild Award, a BIF Award, two Saturn Awards, four Drama Desk Awards, and two Critics' Choice Awards. He has also received nominations for two Academy Awards, five Primetime Emmy Awards, and four BAFTAs. He achieved worldwide fame for his film roles, including the titular King in Richard III (1995), James Whale in Gods and Monsters (1998), Magneto in the X-Men films, and Gandalf in The Lord of the Rings and The Hobbit trilogies.

The BBC states that his "performances have guaranteed him a place in the canon of English stage and film actors".  A recipient of every major theatrical award in the UK, McKellen is regarded as a British cultural icon. He started his professional career in 1961 at the Belgrade Theatre as a member of their highly regarded repertory company. In 1965, McKellen made his first West End appearance. In 1969, he was invited to join the Prospect Theatre Company to play the lead parts in Shakespeare's Richard II and Marlowe's Edward II, and he firmly established himself as one of the country's foremost classical actors. In the 1970s, McKellen became a stalwart of the Royal Shakespeare Company and the National Theatre of Great Britain.

McKellen was appointed Commander of the Order of the British Empire in the 1979 Birthday Honours, was knighted in the 1991 New Year Honours for services to the performing arts, and made a Companion of Honour for services to drama and to equality in the 2008 New Year Honours. He has been openly gay since 1988, and continues to be a champion for LGBT social movements worldwide. He was awarded Freedom of the City of London in October 2014. 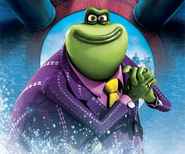 The Toad from Flushed Away
Add a photo to this gallery

Retrieved from "https://dreamworks.fandom.com/wiki/Ian_McKellen?oldid=123157"
Community content is available under CC-BY-SA unless otherwise noted.