Jim Cummings performed the voice of Hernan Cortes and one of the Indian who informs Chief Tannabok about the approaching strangers being led by Tzekel-Kan in The Road to El Dorado, Captain of Guards in Shrek, Luca in Sinbad: Legend of the Seven Seas and Title Narrator and Graduation Announcer in Bee Movie. In Antz, he was the voice of one of the Soldier Ants and the One Worker Ant who informed Weaver of Z running off with Princess Bala. He also did the voices of Winnie the Pooh and Tigger from the Winnie the Pooh media.

Hernán Cortés from The Road to El Dorado 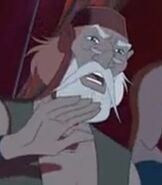 Luca from Sinbad: Legend of the Seven Seas
Add a photo to this gallery

Retrieved from "https://dreamworks.fandom.com/wiki/Jim_Cummings?oldid=105494"
Community content is available under CC-BY-SA unless otherwise noted.