View source
watch 01:33
Wiki Targeted (Entertainment)
Do you like this video?
Play Sound

Trollhunters: Rise of the Titans

Jimbo (only by Toby)

For the glory of Merlin, daylight is mine to command

“Destiny is a gift. Never forget that fear is but the precursor to valor. That to strive, end, and triumph in the face of fear is what it means to be a hero. Don’t think. Become.”
― Jim Lake Jr.

James Lake Jr. is the main protagonist of Trollhunters. He is voiced by Anton Yelchin and Emile Hirsch.

After the battle between Trolls Kanjigar the Corageous and Bular, Kanjigar sacrefices himself to let the Amulet of Daylight find a new Trollhunter, that will protect two worlds at the same time... by a lucky accident, Jim Lake Jr. with his friend Tobias Domzalski wore late at school. During their rush, on bikes Jim was attracted by an unknown voice, that led under bridge where Kanjigar just died, in his remains that turned into rocks (because sun is deadly for the Troll race) was a shiny thing, later revealed as an amulet of Daylight, Jim took it and after the Short day in school, he was staring at this unknown magical object and suddenly there wore noises that came out from the basement... actually Jim had non-human guests: one Troll was wise fatty, with giant face and many eyes (Blinky) and the other one was more tall, giant Troll, with pacifistic nature (AAARRRGGHH!!!) they've revelaed to Jim the secret that changed his life forever, he was chosen by an amulet and now he has to protect the world from Bular and his army of evil Trolls. Jim Lake Jr. become a Trollhunter.

Claire’s tears was able turn Jim back into a human again for good.

In his human form, Jim was a tall, slim young man of fifteen (later, sixteen), with blue eyes and short dark brown hair. He wears a blue zip-up jacket with the sleeves rolled up to his elbows, and a white shirt underneath. He has blue jeans and blue and white sneakers.

While using the Amulet of Daylight, Jim wears a silver suit of knight's armor, complete with breastplate, pauldrons, blue trimmings, greaves, and sabatons. Underneath the armor, he wears a sort of black undershirt, although this inner layer has never been fully shown. While wielding the Amulet of Eclipse, this armor is black with red trimmings. Both armors have their respective amulets mounted on Jim's left chest and their swords stowed on the backs of the armors. The armor becomes permanently attached to his body after being transformed into a troll. 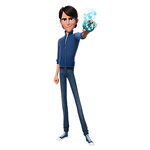 Jim in his everyday clothing with the Amulet of Daylight.

For the Glory of Merlin Daylight is Mine to Command

Jim in his Daylight armor

Jim in his Troll form

All the Main Characters Of Trollhunters