Dreamworks Animation Wiki
Register
Don't have an account?
Sign In
Advertisement
in: Actors, Father of the Pride actors, Bee Movie actors,
and 2 more

On television, he has had regular roles on Amazon Studios's Alpha House and on the first season of HBO's Treme and has been a frequent host of Saturday Night Live, as well as playing guest roles on series such as Community. John Heilpern of Vanity Fair has called him "among our very finest actors".

Larry from Father of the Pride 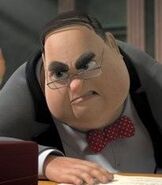