Despite its mixed critical reception, it was a success at the box office, grossing $532 million worldwide against its $75 million budget.

Phil and Mike originally planned to do a 45 minute VeggieTales episode about Noah's Ark. But because animating animal fur is difficult, the story was switched over to Jonah due to water being easier to animate. After a long script writing, the team decided that the "episode" should be a feature-length film. All the characters for the movie were made in 1999, but production didn't begin until a year later due to the lack of people at Big Idea. They would eventually do an adaptation on Noah later. 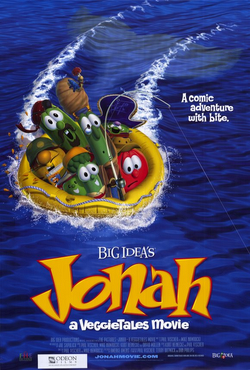 Retrieved from "https://dreamworks.fandom.com/wiki/Jonah:_A_VeggieTales_Movie?oldid=132991"
Community content is available under CC-BY-SA unless otherwise noted.