"God, why are you doing this to me? Do you hear me? Any kindness you take away. You're the one who gave me the dreams. You brought me the gift! Some gift! My dreams are lies. What have I done to deserve this?"

One day, Joseph wanted to help his brothers, so they sarcastically told him to watch the herd while they round up the stray sheep, when in fact they were swimming. In the midst of Joseph's realization of this, one of the lambs he was watching wandered off and attracted the attention of a wolf. Joseph ran with the lamb to escaped but was only saved by the help of his father who scared the wolves away. However, Joseph noticed a dead ram, similar to one he had dreamt about, and Jacob realized that his dreams provided visions of the future.

Throughout the film, Joseph develops new relations in Egypt with Asenath, Potiphar, and the Pharoah.

However, Joseph comes up with another plan. All of Joseph's brothers are arrested, and the youngest, Benjamin, is accused of stealing a goblet from Joseph. Joseph threatens to imprison Benjamin, but his other brothers beg Joseph to reconsider and take one of them in his place. This leads to his brothers confession that they were blinded by jealousy and sold Joseph into slavery.

Soon, Joseph reveals himself, and introduces his brothers to his wife, Asenath. At the end of the film, Joseph reunites with his father, Jacob, and he offers his whole family to live in Egypt with him.

Joseph is highly intelligent and is able to interpret dreams.

Joseph with his brothers and Jacob 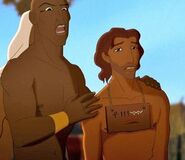 Joseph as a second-only Pharaoh

Joseph and Asenath with their upcoming child

Joseph with his wife Asenath and two sons

Joseph reunites with his father
Add a photo to this gallery
Retrieved from "https://dreamworks.fandom.com/wiki/Joseph?oldid=41713"
Community content is available under CC-BY-SA unless otherwise noted.