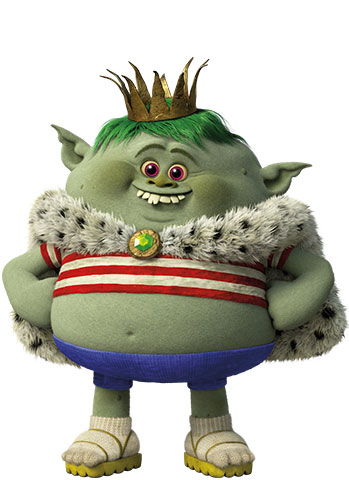 “Yet here I am. My belly empty and my heart full.”
―Prince Gristle

Gristle (also known as Prince Gristle later known as King Gristle Jr.) is the son of King Gristle Sr. and an unknown female Bergen, the love interest and later boyfriend of Bridget, the Prince, later King of the Bergens, and a major character from the movie Trolls. He is voiced by Christopher Mintz-Plasse.

Prince Gristle is the surly twenty-something King of the Bergen Monsters. He inherited the crown at a young age when his father was dethroned by his angry subjects. (His royal screw up: allowing everyone’s favorite delicacy — Trolls — to escape Bergen town.) Mortified by his father’s blunder and desperate to make his subjects love him, Prince Gristle vows to put Trolls back on the menu, and bring happiness back to Bergen Town.

Prince Gristle is a green bergen with bright green hair. He wears a red and white stripey top that is too small for him, blue shorts, a royal red cape, a golden crown, white socks and yellow sandals.When he was a child he wore a red royal cape, a small gold crown, and a white diaper or underpants.

Prince Gristle is first seen as a child waking his father on the day of Trollstice (the one day Bergens feel happiness by eating a Troll), with the prince preparing to have his first taste of Troll. The Troll chosen for Gristle to eat is Poppy, the young princess of the Trolls. However upon chewing "Poppy", the prince and the other Bergens discover that Poppy and the other Trolls are decoys and the real Trolls along with Poppy and her father King Peppy escaped. Angered at the Trolls' escape, King Gristle Sr. banishes the cook Chef. Later that night, the prince asks his father what will make him happy now, to which the King sadly tells him that nothing will and he will never feel happy.

20 years later, a now adult Gristle is now King (after his father either died, stepped down, or was dethroned). Chef returns to the palace and is able to convince the young King to allow her back, by revealing captured Trolls to him. He later supposedly eats Creek, but actually keeps him in a gem on his robe. Gristle also meets and falls in love with a female Bergen named Lady Glittersparkles, unaware that she is actually his scullery maid Bridget.

The King later decides to stop eating Trolls after Poppy tells him that Bergens don't need to eat Trolls as the King was happy with Bridget.

DreamWorks Wiki has a collection of images and media related to King Gristle Jr..
Retrieved from "https://dreamworks.fandom.com/wiki/King_Gristle_Jr.?oldid=93008"
Community content is available under CC-BY-SA unless otherwise noted.