Kolivan is the Galra leader of the Blade of Marmora, an order of warriors dedicated to bringing down the Galra Empire and ending the rule of the evil Emperor Zarkon.

Kolivan first encountered the Defenders of the Universe when they arrived at the Blade of Marmora's headquarters, having obtained its coordinates from the Blade Ulaz, who had sacrificed himself to save Voltron. However, Kolivan had long regarded Ulaz as something of a radical, and wasn't convinced that the Blade allying with Voltron was the best course. When Keith proved to have a ceremonial blade exclusive to members of his organization, Kolivan quickly became suspicious, and wanted the Voltron paladins to leave. Keith refused to do so, however, and so agreed to undergo the Trials of Marmora, which Kolivan would inform him would lead to "Knowledge or death." Keith eventually succeeded in "awakening" his blade, demonstrating to Kolivan that Keith was part Galra.

Accompanied by fellow Blade Antok, Kolivan came to the Castle of Lions and met with Princess Allura, who was fairly cold towards him despite his expressing gratitude that she was still alive. He then informed the Defenders that Thace, the Blade of Marmora's operative within Galra Central Command, was in danger of being discovered, forcing them to act quickly in order to defeat Zarkon. Working together with the people of Olkarion and the Blade of Marmora scientist Slav after the Paladins freed him, they came upon a plan to disable Central Command's systems and upload a virus that would enable Voltron to cripple the craft. The plan was initially successful despite Thace's capture and later sacrifice, but they were then forced to contend with Haggar's Komar device. Led by Allura, Kolivan and Antok attacked the Druids to prevent them from using the Komar; they succeeded, but Antok perished as a result.

Kolivan and Allura returned to the castle as the force made their escape, having defeated Zarkon only for Shiro to disappear as a result.

As the leader of the secretive Blade of Marmora, Kolivan was cautious and suspicious, qualities that had enabled the Blade to survive for centuries, though Allura felt that this caution had been detrimental to their efforts. Kolivan was also hesitant to ally with the Paladins initially, but after working with them to create a viable plan for defeating Zarkon came to the conclusion that it was the right course. He was somewhat understanding of Allura's anti-Galra sentiments, though he did hope she would eventually recognize that Zarkon's crimes should not be held against the entire species.

Like most members of the Blade of Marmora, Kolivan was a skilled warrior, wielding a ceremonial blade with considerable ability. 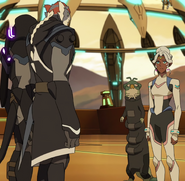 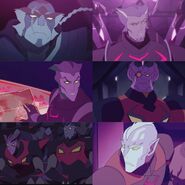 Kolivan gives Keith the mission of infiltrate Ranveig's base, extract Krolia, and destroy Ranveig's weapon.
Add a photo to this gallery
Retrieved from "https://dreamworks.fandom.com/wiki/Kolivan?oldid=117349"
Community content is available under CC-BY-SA unless otherwise noted.