"YOU ARE ARRESTING!"
"I Just Want Your Password!"
"That...Is Enough...Shushing!"

Officer Kyle is a long-suffering Boov Traffic Cop who was tasked by Captain Smek to hunt down Oh. He appears in the movie Home and the TV series Home: Adventures with Tip and Oh.

Kyle is first seen doing his job as a traffic cop when Oh goes and sees him and calls him "friend", Kyle says he's not his friend but Oh gives an example like having conversations with when his doing his job but Kyle disagrees with him, Oh wants to invite him to his but Kyle says it's a waste of time, Oh sends him a invite but accidentally sends it to every Boov on the planet (including the Gorg), Kyle gets angry with Oh for what he did and explains that if the invite goes to the Gorg he will invade the planet they are recently on, Kyle tries to arrest Oh, but sending backup but he but gets away.

Later on Kyle explains to Captain Smek that Oh isn't his friend, but Smek sends him to find Oh and tell what his password is, Kyle investigates the store to see where Oh went, he sees foot prints and follows it towards Oh, Kyle finally finds Oh and Tip at near a bathroom, but Oh does calls him the same name from earlier on but Kyle is still not his friend and will become a boov hero for arrest him but gets defeated by Tip but all he wanted was he's password and gets defeat again by accidentally blows up the gas station but survives the explosion.

Kyle goes to Paris and tells Smek there is a tiny problem that Oh got away with Tip his head hit by Smek's "Shusher", Smek tells Kyle if he got any idea what to do, Kyle suggests that they type in random buttons which doesn't work for only Oh knows it.

Kyle tries to stop Oh and Tip but gets flung out of one of the pods by Smek and falls off onto the street and gets another pod to go after Oh and Tip but gets crushed by the giant golden horse but some how manages to escape from it within he's pod bubble gets popped by Oh and falls in a trash bin.

Later after the Gorg attacks the Boov, Kyle and the rest of the Boov (apart from Smek) was amazed at Oh running towards the Gorg they think Oh was a Super Boov, before Smek could hit Oh Kyle grabs his "Shusher" to tell him to stop Shushing, Kyle agrees with Oh to have him as captain and thinks it should be Oh Kyle makes him, Kyle explains to Oh that he's not the only one who makes mistakes, he's only one was not being Oh's friend but he becomes Oh's friend again and starts dancing at his Boov party near the end. 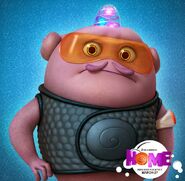