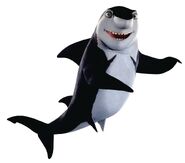 "Lil buddy? Did I scare you? Don't worry little wormy. I'll get you out in a jif"

"You almost gave me a heart attack!"

"I was just pickin' ya some flowers!"

"That song's giving me the creeps."

Lenny swinging harmlessly on a barstool

"PUT THE SHRIMP DOWN!"

Lenny gasps in shock at the sight of Frankie being hit by the anchor.

"How am I ever gonna explain this to Pop? oh no."

Lenny looking right through the window of where Frankie's funeral ceremony is located, but not saying anything at all

Lenny swimming away from the funeral ceremony

"He could be anywhere."

"Get ahold of yourself, man! this is no time to act crazy!"

"It's my fault, kinda, not really, but still, my brother-"

Lenny begging Oscar to take him home with him.

Oscar and Lenny hiding behind the wall.

"Oh you're a liar." Lenny knows the Sharkslayer is a phony since he was there when the anchor crushed Frankie.

Oscar sneaking Lenny into the reef.

"In case you haven't noticed I'm different from the other sharks. Let's leave that. Good night."

"Not gonna laugh? Well that's just what you say. And then what happens once I tell you? You laugh."

You need to slay a shark...and I need to disappear. Here's what we're gonna do.

Lenny trying to stop Oscar and Angie's argument, to no avail.

"I can't just waltz in there and say "Hi pop I'm a dolphin!" And my friend the Sharkslayer's a fake!" C'mon we need a better plan!"

Lenny and Sykes laughing with Oscar

Lenny revealed to his father that he was alive

"You always wanted me to be like Frankie. I'll never be the shark you want me to be."

Lenny and his father reconciling.

Lenny and his dad bring the mob for the Wash

Lenny leads the other sharks in dancing

Jack Black
Add a photo to this gallery
Retrieved from "https://dreamworks.fandom.com/wiki/Lenny/Gallery?oldid=131774"
Community content is available under CC-BY-SA unless otherwise noted.