Li Shan (known simply as Li, also spelled Lee; previously known as Po's father and Panda Dad) is one of the main characters in Kung Fu Panda 3. He is a giant panda and the biological father of Po. He was separated from his wife and son during the massacre of his home village by Lord Shen and his wolves. He returns in Kung Fu Panda 3 where he will find Po and take him to his current residence in a hidden village with other pandas.

Twenty years prior to the events of the film, Li lived happily with his wife and infant son in the panda village. But one day, an evil peacock by the name of Lord Shen and a pack of wolves invaded their home, bent on annihilating all of the pandas. In the chaos, Boss Wolf and another wolf attempted to kill the young Po, but his father defended him and swatted the wolves away with a rake, damaging Boss Wolf's left eye and scarring it for life. Li then told his wife to take their son and run, which she did. It is unknown what exactly happened to Li during and after the battle, but he managed to survive and presumably fled to the mountains with other surviving pandas, spending the following years in hiding. In the film, Li was first seen in one of Po's nightmares, where he and his wife told Po how they replaced him with a radish that was better at kung fu than he was.

Li at the panda hideout learning of Po's existence At the very end of the film, Li was seen living in a hidden village far away from the Valley of Peace with many other pandas. He suddenly became aware of Po's existence and proclaimed, "My son is alive" while overlooking the other pandas in his village.

In Kung Fu Panda 3, Li was shown in the noodle shop partaking in a dumpling-eating contest, receiving cheers from a crowd of customers after breaking his son's dumpling record. When Po questions who he is, Li introduces himself and says that he's looking for his son, who was lost many years ago.

Po reveals that he lost his father. The crowd watches them in suspense, but the two eventually depart, neither making the connection that they're father and son, much to the exasperation of the crowd. Soon, however, they realize their mistake and embrace. When Po asks how he found him, Li explains that other Pandas survive as well in a hidden village, and that he was informed of Po's survival by a message "from the universe." Mr. Ping is skeptical of this, however, having raised Po himself since he was a baby. Nevertheless, Po decides to spend some time with Li by giving him a tour of the Jade Palace, messing around with several kung fu artifacts in the process. Shortly after being introduced to Shifu, however, Kai's warriors arrive to attack the valley, leaving Li concerned for his son's safety. After learning more about Kai and his history with Oogway and the Pandas, the heroes decide that Po must become a Master of Chi, and Li offers to train him. The two Pandas set out for the village and are joined by Mr. Ping, who is troubled by Li Shan's return and what it could mean for his and Po's relationship. Upon reaching the village, Po is overjoyed to meet so many other Pandas, and feels that he finally knows who he is.

Li teaches his son the ways of his people, but keeps postponing the lessons for Chi. After Li has a heartfelt conversation with Po about his mother, Tigress arrives at the village and informs the Pandas of Kai's approach, and Li then admits that he has lied to Po about knowing the ancient Chi techniques of the Pandas, having been lost to them over the centuries. Furious, Po determines to face Kai and destroy him using the Wuxi Finger Hold, but is informed by Tigress that it cannot be done alone. After a pep talk from Mr. Ping, Li Shan offers himself and the other Pandas to Po's tutelage so that he will have an army to face Kai's Jade warriors. Following some rigorous-and highly unconventional-training, Li and the Pandas face Kai's assault, and manage to disorient him by attacking his army.

While Po confronts Kai in the spirit realm, Li and the others manage to employ the Chi technique, having been inspired by Po's leadership and sacrifice. Soon enough, Po returns to the mortal realm as a Master of Chi, to everyone's awe and chagrin. Proud of their son, Li and Ping embrace Po happily. At the end of the film, with Shen and Kai both defeated, Li and the other pandas celebrate freely among the villagers in the Valley of Peace, using the Chi manipulation technique along with everyone in attendance.

Li arriving at the noodle shop in Kung Fu Panda 3 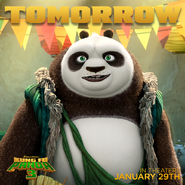 Add a photo to this gallery
Retrieved from "https://dreamworks.fandom.com/wiki/Li_Shan?oldid=124727"
Community content is available under CC-BY-SA unless otherwise noted.