Madagascar: A Little Wild is a Dreamworks Television Animation series that premiered on September 7th, 2020 on Hulu and on Peacock TV.[1]

Madagascar: A Little Wild, features the loveable foursome of Alex the Lion, Marty the Zebra, Melman the Giraffe and Gloria the Hippo. The series showcases the team as kids residing in their rescue habitat at the Central Park Zoo. They might be small, but like everybody who lands in New York City, these little guys have big dreams and Madagascar: A Little Wild will follow all of their adventures. 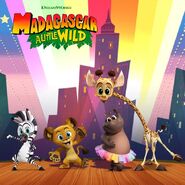