Minion is the deuteragonist of the Megamind franchise. He is the tritagonist of Megamind and the deuteragonist of The Button of Doom. He is Megamind's henchman, best friend and voiced by David Cross who also voiced by Crane from Kung Fu Panda. His appearence is a robot with a fish inside a dome of water. His body, arms, and legs are that of a gorilla. When he was a baby fish, he is in a fluid filled ball. 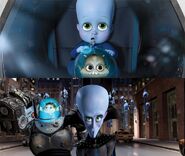 Minion with Megamind, Then & Now
Add a photo to this gallery
Retrieved from "https://dreamworks.fandom.com/wiki/Minion?oldid=126417"
Community content is available under CC-BY-SA unless otherwise noted.