Master Monkey (or simply Monkey) is another character and a member of the Furious Five in the Kung Fu Panda Franchise.

Monkey spent most of his childhood in his home village in China alongside his older brother Wu Kong, but while he was happy just merely playing pranks, Wu Kong sank deeper into a life of crime and became the town thief. He was quickly capture and taken to jail, shaming his family. Years later, Wu Kong escaped and was even trying to steal money from his own mother while she was asleep. Monkey, now training at the Jade palace, caught him stealing and begins to fight him. During their battle, Monkey left a scar on Wu Kong's face. Monkey's mother wakes up and see her two sons fighting, which breaks her heart and causes her to collapse. Wu Kong quickly leaves yet again and disappears into darkness. Soon before she passed on, Mother's mother makes Monkey promise to protect the family.

At the Film he was first seen with the Furious Five Fight at the other side of the bridge. 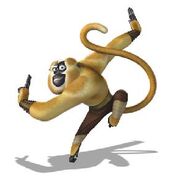 Retrieved from "https://dreamworks.fandom.com/wiki/Monkey?oldid=70249"
Community content is available under CC-BY-SA unless otherwise noted.