"He really is dead."

Mooseblood is a character in Bee Movie. He is a mosquito and one of Barry's friends.

During his youth, Mooseblood lived in the typical, hostile mosquito environment, in which each of them only cared for their own well-being and where female mosquitoes preferred other species over their own when finding a relationship.

Mooseblood soon left for Alaska to experience the taste of moose blood and ended up colliding into the windshield of a Honey Farms truck along with many other bugs. Eventually, he met Barry Benson when the bee ended up on the windshield as well. Despite the arrival of wipers, they were able to find cover in the truck's horn. After the two had a conversation about their lifestyles and current predicaments, Mooseblood was drawn to a blood donation unit and met many other mosquitoes before asking if one of them had brought their "crazy straw".

Later, Barry would employ him in his law firm. When questioned if he was a lawyer by a cow, Mooseblood explained that he "was already a blood-sucking parasite" and all he had needed was a briefcase. 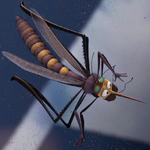