"They are savages! Tonight we die!"

Mort is a character in the Madagascar series.

Mort is a small, timid, innocent, very annoying, cute, cuddly, accident-prone, and a high-pitched mouse lemur with a lot of anxiety.

Most animals find Mort's personality as cute and adorable, but Julien is highly annoyed by him and treats him with contempt and hatred, eventually shouting, "Oh, shut up! You're so annoying!" in response to his inane chatter. Mort responds to this by giggling and looking flattered. Though quite timid, Mort can also be shrill and vocal in confrontations.

King Julien finds Mort incredibly annoying, and doesn't hesitate in proclaiming so. Despite this, Mort doesn't show any lasting unhappiness, and his expression changes within the same scene.

Mort has an obsession with King Julien's feet for unknown reasons, which King Julien despises. In his anger, Julien once banished Mort from the zoo, forcing Mort to seek a "cure".

Roles in the series

Mort made his first appearance in Madagascar, wherein he lives among the other native lemurs under King Julien. The King used Mort as a test to see if Alex and the others eat lemurs (where Mort was starting to cry, because Alex scared him), and Mort quickly decided that he likes them. Later, the King noted that if Alex does not like fish and still hungers for steak, Mort is "Plan B." Mort is last seen in the film with the other lemurs, wishing the animals farewell, and Julien uses Mort as a make-shift footrest.

In Madagascar: Escape 2 Africa, Mort attempted to follow King Julien and Maurice on the Penguins' plane, but the lemur king goes to extremes to keep Mort out of the plane, declaring that Mort had "scissors and hand cream" (he did in fact, have a pair of scissors). However, Mort succeeds in attaching himself to the outside of the plane, and promptly falls into the ocean shortly before it crashed. After reaching a shore at Africa, Mort is chased by a shark (where Mort was screaming in terror), which tries to eat him, and follows him onto the African preserve. Mort (still being chased by the shark) find King Julien at a volcano, where Melman had just decided that he would not sacrifice himself to return the preserve's water. The shark accidentally falls into the volcano, just as Alex and Zuba destroy the dam, blocking the river, thus leading King Julien to believe that his plan to give a sacrifice to bring back the water was successful.

The Penguins of Madagascar

At one point, stuffed "Mort" dolls became very popular, and King Julien, out of jealousy, throws them into the skunk habitat. Mort is accidentally shipped back to the factory with the dolls, and must be saved. In the episode, King Julien also reveals that the only reason why he allows Mort to stay with them is so he can express his dislike for Mort in front of him, and keep himself entertained.

Mort is shown to be unhappy with his past self after growing in size and muscle mass, due to an invention from Kowalski. However, after being turned back into his regular self, Mort expresses that he is happy with who he is.

Despite the fact that Mort is often treated poorly by King Julien, the other animals show concern for him, as Maurice tries to (if with limited success) make saving Mort when he may be in danger to be the King's biggest concern, and Skipper (who calls to Mort "Sad Eyes") dived in the way of the mutant rat overlord to save Mort.

In one episode, Mort grows big and has a humongous, muscular body. When Julien was hurt, Mort saved him. 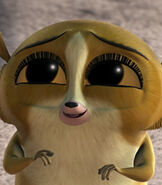 Retrieved from "https://dreamworks.fandom.com/wiki/Mort?oldid=69974"
Community content is available under CC-BY-SA unless otherwise noted.