"But I was their enemy. I was the prince of Egypt, the son of the man who slaughtered... their children! You've chosen the wrong messenger! H-how can I even speak to these people? "

Moses is the main protagonist in the film The Prince of Egypt. He is the son of Yocheved and younger brother of Miriam and Aaron. As an infant, he put into a basket and saved by his mother and was adopted by Queen Tuya. He became Rameses' adoptive younger brother. Later in life, Moses learned of his true identity and eventually freed the Hebrews from slavery. He is voiced by Val Kilmer (who also provides the voice of God) whereas his singing voice is provided by Amick Byram.

While growing up, Moses lived the carefree life of a prince. He was lively, rakish, and fun-loving. He was also very loving towards his "mother", Queen Tuya, his "father", Pharaoh Seti, and his "older brother", Rameses. However, Moses was also very privileged and insensitive towards those "beneath" him. He tended towards recklessness in addition to his good qualities. But after God revealed to him his true heritage through a dream, Moses's personality underwent a change. He began to care about Hebrew slaves and became sensitive to his "superiority". When Moses escaped Egypt and lived in Midian, he became more responsible as a shepherd and care-giver to the people of Jethro's tribe. After Moses was chosen by God to become the leader of the Hebrews, he had to adopt a more serious personality. Yet throughout the film, Moses maintains his loving nature and free-spirit.

At the beginning of the film, Pharaoh Seti I orders that all the newborn Hebrews are killed to prevent the Hebrew population from overtaking that of the Egyptians. Seti feared that as the Hebrews grew in number, they would attempt to overthrow him. As the cries of mothers echoed through Egypt, a Hebrew woman, Yocheved, her daughter, Miriam, and son, Aaron, take a new born baby to the Nile and place him in a basket. The child is Moses. Yocheved, nearly pursued by Egyptian guards, kisses her child and desperately sends him down the river, in the hopes that he will find sanctuary somewhere else. The basket finds its way to the royal palace and is found by Queen Tuya. Tuya is smitten with the child she finds within and decides to keep him. Miriam, who followed the basket to the palace, finds her brother in a place of safety and prays that he will return to deliver the Hebrews out of Egypt. Queen Tuya names the boy Moses (which means "raised from the river").

Years later, Moses grew up in a carefree life as a prince. One day, he and his adoptive brother, Rameses, were racing through the temple of Ra and made a mess of it. Rameses got in more trouble than Moses because he was next in line for the throne and Moses wasn't. After Rameses was called "a weak link in the chain" Moses asked Seti if Rameses could just have the opportunity to prove that he's worthy of the throne. Seti agreed and later that night, he made Rameses Prince Regent. It was also at the party that Moses met his future wife, Zipporah (or Tzipporah). Zipporah is sent to Moses' room but she escapes and instead of turning her in, Moses let her go and followed her till he met Miriam and Aaron. Miriam was excited to meet her long lost brother but Aaron didn't seem to recognized him. Miriam tries to explain that Moses is not actually a prince and that he was her brother but Moses doesn't know what she's talking about. Before he storms off, Miriam sings the lullaby Jochebed sang to him as a baby. Moses recognizes that and runs back to the palace in confusion. Moses then falls asleep and God showed what Pharaoh Seti did in the beginning of the film and when Moses wakes up he's shocked to find a carving of Seti ordering all the newborns to be thrown in the Nile on the wall. Pharaoh Seti explains why he did this and tells Moses that they were only slaves, but Moses doesn't believe him and runs off. Moses is then seen at the spot where he was found as a baby and Queen Tuya tells him that he is their son and they loved him.

At the temple of Ra, Rameses is planning to redesign it and Moses saw all the hard working Hebrews but with a different impression. One slave was being whipped and Moses, out of reaction, came and killed the guard who whipped the slave. Moses then runs away, but Rameses tries to tell him that he can change what happen. However, Moses refuses to listen and leaves Egypt. He then travels the desert for a few days until a sand storm rolls in and buries him. A camel then takes a bite out of his hair, waking him up, and the leaves with a bag of water. In a lust for thirst, Moses follows the camel back to an oasis where he drinks the same water as the sheep. He then sees desert muggers picking on children and makes their camels run away free. Moses then accidentally falls down the well and the children try to get him out. Zipporah arrives and helps but when she recognized Moses, she dropped him back down to the bottom of the well.

Moses then spends a few years in the oasis and during that time, he and Zipporah were married. One day, while Moses was tending to the sheep, a lamb wandered into a cave and Moses follows. Inside the cave is a bush burning cool fire and before Moses knew it, the bush spoke. It was God that was talking him and He told Moses that He has heard the cries of the Hebrews and He has chosen Moses to bring His children out of Egypt. Moses listens and he and Zipporah return to Egypt. Moses and Rameses reunite after years of not seeing each other but the reunion is short lived Moses asks Rameses to let God's people go free. Rameses refuses and doubles the work load of the Hebrews (much to almost everyone's displease). Aaron then disses Moses when he's in the dirt but Miriam speaks otherwise. Moses then goes to the Nile and asks once again to let God's people go. Rameses refuses and in an instant, Moses turned the Nile to blood. Rameses thinks this is a trick and still refuses to let the Hebrews go.

Over the next few days, chaos rained over Egypt until finally the Angel of Death took the lives of the first born children of Egypt and Rameses gave Moses and the Hebrews his permission to go. Moses leads the Hebrews out of Egypt but before they could cross the Red Sea, Rameses and his army appear and plan to kill the Hebrews. However before they could get a chance, God summoned a tornado of fire to block the soldiers from reaching the Hebrews. Moses then made a clear pathway through the Red Sea and guided the Hebrews through. However, when they were almost on the other side, the fire tornado disappeared and Rameses and his soldiers charged toward the Hebrews. However, the walls of the sea began to fall and in an instant, all to the soldiers drowned and Rameses was left on shore in defeat. Moses says one last goodbye to his former brother and the film closes with him receiving the 10 Commandments.

Moses is found by Tuya

Moses and Rameses race in their chariots

Moses discovers his past

Moses drinking from a well after wandering in the desert

Animation reference sheet of Moses's appearance throughout the film

Moses and his family free from slavery

Moses brings the Ten Commandments to the Hebrews

Moses beholds the destruction of Egypt

Moses is chosen by God

Moses and Rameses share one last moment before the final plague 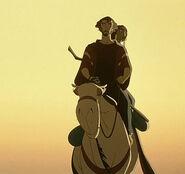 Moses returns to Egypt to free the Hebrews

Moses cries after his encounter with God

Statues of Seti, Tuya, Ramses, and Moses in Seti's palace.

Moses and his two dogs.
Add a photo to this gallery

Retrieved from "https://dreamworks.fandom.com/wiki/Moses?oldid=63992"
Community content is available under CC-BY-SA unless otherwise noted.