Nugent is a character in Over the Hedge. He is a Rottweiler who chases RJ and Verne across many lawns, wanting to play with them, but he's defeated when Verne unleashes his leash. In the end, he bites Dwayne as he was trying to escape from him.

While Rj and Verne fight over the wagon, RJ sees a chain and tries to get Verne to follow him quietly. But the turtle won't listen to him and steps on a squeaky toy. Nugent hears it and says "Play?" He sees Verne stepping on his doggy toys and starts chasing him. RJ carries a doll with a pull string like Woody from Toy Story to distract the dog, But the pull string gets stuck on a stick and the doll says "Let's Play!" Nugent hears it and chases RJ while his chain gets stuck on the wagon tugging it with Verne on it. While Nugent plays chase with the raccon, he and the wagon crashes into walls until they made the BBQ man fall on his back and dragging the BBQ gas tank. Then RJ says "Look people! Play with them!" then Nugent charges through the people's table. The gas tank's ending starts up like a rocket and gaves the wagon a boost of speed. RJ tells Verne to unhook the chain and the chain comes off Nugent's collar making landing on the grass and sadly says "Play!"

At the end, The Sniffer escapes from the cops while Gladys fights with them by climbing over a fence. But he lands on Nugent's toys and he says "Play?" He runs up to The Sniffer and bites him.

In Over the Hedge: The Video Game

He does not appear in the game, but there is another dog who looks just like him who chase RJ, Stella, Hammy & Verne at the Maintenance Room while there looking for the popcorn machine. He'll start busting over things like a bull until he hits the gate and be defeated.

He is black and brown. 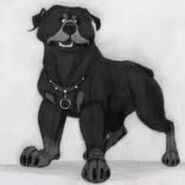