Penny Peterson is the daughter of Paul and Patty Peterson and the tritagonist in Mr. Peabody & Sherman. She's voiced by Ariel Winter. She is Sherman's nemesis turned best friend and crush.

Penny is a serious girl for someone of her age. Penny is very rich and spoiled. She appeared to have been envious of Sherman's smarts and called him a dog and bullied him which resulted into a fight. She may also have a wicked sense of humor and spiteful as she would go far to get back at those she dislikes, as she bullied Sherman and in Egypt, when King Tut threatens to kill Mr. Peabody and Sherman, she says "You'd do that for me?", indicating she may have wanted that to happen out of spite for Sherman showing her up in class. However, later they form a very strong friendship during their adventure. Sherman has a large crush on her. Penny also seems to have a crush on Sherman as well. So it happens that she and Sherman have a crush on each other. She also is very rebellious, as she tends to stray from Sherman and Mr. Peabody during the time traveling adventures, as shown when she wanted to stay in Ancient Egypt to rule with King Tut and keep his riches once he died, and when she took Da Vinci's flying machine for a test run with Sherman as an unwilling accomplice. She is also manipulative and greedy, as shown when she wanted to marry Tut knowing he would die young in order to inherit his throne and riches (though eventually backed out once she realized when he died she would be killed and die with him) and when she tricked Sherman into showing her how Da Vinci's machine worked. She seems to have a reckless streak, as seen during her and Sherman's flight on Da Vinci's machine. She deliberately let go of the controls, effectively forcing Sherman to take over. She tends not to accept the consequences of her actions; when Mr. Peabody admonished her for turning Sherman into a "hooligan", she shrugged it off, saying it wasn't her fault.

Despite all of this, she is also shown to be willing to face up to her mistakes, as she proclaimed in front of everyone that it was her fault for provoking Sherman to bite her and that he didn't do anything wrong and attempts to take full responsibility for her actions in order for Mr. Peabody and Sherman to remain together(though this is not enough to convince the cold hearted Ms. Grunion to release Mr. Peabody) and apologizes for everything she has done. This proves not only can she understand her own mistakes, but is also loyal and caring to those she is close to.

Role in the movie

Penny first appears when Mr. Peabody gives Sherman a dog whistle, and in class, when the teacher asks "What tree did George Washington cut down?". She replies that it is the cherry tree, but Sherman immediately claims that George Washington never cut down any trees. Angered, she tries to get her revenge at lunch, throwing Sherman's sandwich on the floor as he is about to eat it, and ordering him to pick it up, calling him a dog. She then drags Sherman to the sandwich, as most people chant, and Sherman's friends worry. Sherman responds to this by biting Penny's left arm.  Penny reports this to Principal Purdy, who informs Ms. Grunion of Children's Services. Grunion warns Mr. Peabody that due to this incident, she will inspect Peabody's home, and will take Sherman away if she deems it to be unfit.

Penny and her parents are invited by Mr. Peabody to dinner at his house, hoping to resolve the situation smoothly. Upon arriving, she immediately sees Sherman and glares at him, giving a grudging greeting when prompted. She unhappily follows Sherman to his room as instructed by Mr. Peabody, and instead of talking to Sherman, she sits down in a chair and looks at things on her phone. She hears Mr. Peabody telling Sherman to try to be friends with her, to which she responds with exasperation. Sherman tries to start a conversation, referencing a quote he learned from Sigmund Freud.  This evokes a response from Penny, who brings up the George Washington incident, and demands how Sherman knows that those things are true. Sherman answers truthfully, but Penny does not believe him and calls him a liar. Despite Mr. Peabody's earlier warnings, Sherman decides to show the WABAC to Penny.

Penny is amazed upon seeing the machine and asks where they will go. Sherman warns that Mr. Peabody told him not to use it, which Penny chooses to disobey and calls Sherman a dog again for always doing what he's told. This pushes Sherman to disobey Mr. Peabody and take Penny on a journey with the WABAC. The pair went to see George Washington and then went to Ancient Egypt, where she ran away from Sherman.  Sherman goes back to Mr. Peabody for help.

When Mr. Peabody and Sherman arrive in Egypt, they find Penny being treated as a princess, who is annoyed that the two came to get her. She reveals that she is to marry King Tut. Mr. Peabody whispers to her that King Tut dies young and asks if she has thought it through, which she answers that she's getting Tut's wealth after he dies.  Mr. Peabody tries to tell her one more part about being the wife of a pharaoh, which is explained by Tut that upon his death, she will have her organs removed and her body will be mummified (in short, killed). Penny decides she wants to go back with Peabody and Sherman, but is taken away to the wedding while Peabody and Sherman are imprisoned. At the wedding, Peabody and Sherman have escaped and impersonate Anubis, the God of Death, to free Penny. The plan goes well until the jaw of the Anubis statue collapses, revealing Peabody and Sherman. Penny is more than happy to see Sherman, and after an intense chase, the trio manage to get to the WABAC and escape.

When the WABAC starts getting low on power, they make an emergency stop in renaissance-era Italy, where they meet Mr. Peabody's old friend, Leonardo Da Vinci. While Mr. Peabody and Da Vinci build a machine to recharge the WABAC, Penny convinces Sherman to come with her and explore Da Vinci's workshop. When they discover Da Vinci's prototype flying machine, Penny tricks Sherman into telling her how to make it go. Once in the air, Penny gets Sherman to fly by letting of the controls. As they fly over Florence, the two grow closer, Penny playfully splashing Sherman with water from the river. When Mr. Peabody catches them, his worried remarks cause Sherman to crash. As they return home, Mr. Peabody tells Sherman off for destroying the flying machine. Penny defends Sherman, inadvertently revealing that Ms. Grunion wants to take him away from Mr. Peabody. The WABAC then veers off course into a black hole. As Mr. Peabody takes to get them away, he and Sherman argue, with Mr. Peabody calling Sherman "a bad boy". The WABAC crashes on the night of the Trojan attack on Troy. Penny and Mr. Peabody come to and find that Sherman has left. 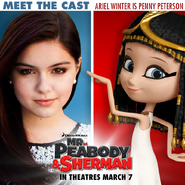 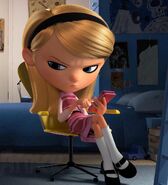 Add a photo to this gallery
Retrieved from "https://dreamworks.fandom.com/wiki/Penny_Peterson?oldid=41095"
Community content is available under CC-BY-SA unless otherwise noted.