Pitch Black, better known as the boogeyman by children, is the main antagonist of the 2012 Film.

In the film, Pitch isn't exactly seen directly at first, but his black nightmare sand is seen swirling around North's globe of the earth. North assembles the Guardians, including Jack Frost, and they discuss the event. Later on Pitch is seen directly. He is standing in CupCake's room and muses about her dreams about unicorns before turning it into a nightmare. Pitch later appears at Tooth's palace where his nightmare horses are seen stealing the children's teeth and kidnapping Tooth's fairies. The Guardians and Jack Frost try to fight back, but fails, though Pitch somewhat ignores Jack. The Guardians and Jack Frost charged at Pitch but he escaped in his nightmare Onyx. The Guardians decided to retreat the teeth from the children's beds to keep them believe in Tooth, Pitch learned this through one of nightmares, Pitch decide to get rid of Sandy once and for all. Jack and Sandy follow two his Nightmares Pitch see Jack again The Sandman appeared behind Pitch and the two started which Sandy have the upper hand, Pitch begs be forgiven and that Sandy could his dream back, Thousands of Nightmares appeared around Jack and Sandy, in the sky Pitch took the opportunity of Sandy,and stab him in the back with a Arrow of black sand. Jack furious charged at Pitch and send a handful of Nightmares to Jack and the Guardians but his surprised Jack destroy them all with amazing force.Pitch then decide to go after Jack. later after Jack taking Sophie back home, he used Jack's Tooth box to lured him to his lair, in there he used Jack' fear of not been believe in, to distract Jack while he destroyed Easter and kidnapping Baby Tooth. Jack departs in disgrace and isolates himself in Antarctica. Pitch appeared to Jack and tried recruit him in creating a world that all Pitch Black and Jack Frost but Jack turn it down, in response he showed Baby Tooth and will trade her for his staff.Jack said yes but Pitch said no since he wanted to be alone,Baby Tooth fight him which end trowing her to a ice crevasse with Jack while he break his staff, leaves Jack in despair.he later appeared one more time in North's Workshop to see the lights gone but one light still glowing: Jamie, he go find the kid to stop him from believing in the Guardians. he arrive in Burgess and see Jack again after Jack tried to beat him Pitch surrounded the weak Guardians in a ally but they escape with Jamie and recruit his friends Pitch send the nightmares to the Guardians and the kids but Jamie turn it into dream sand making the Guardians get the energy back he try battle the Guardians he trying to kill Jack but, at his surprise, Sandy was revived by Jamie and his friends. Pitch was out thanks to Sandy, when he woke up, he saw them having fun. Angered, he went after Jamie, but passed through him, revealing that Jamie no longer believed in Pitch. Pitch now fears that nobody will ever believe in him again. He then tries to retreat, but is cornered and confronted by the Guardians one last time. Tooth punches him, making a tooth fall out, as revenge for the harm he caused to the fairies. When Pitch says they will never get rid of him for good, and that fear would always exist, North replies that as long as one child believes in them, they will be there to fight fear. Pitch then notices that the Nightmares are around and thinks that they are here to support him, but North says that he doesn't know what the Nightmares are here, but says he isn't scared of them. Jack then says that they are possibly sensing his fear. Pitch horrifically realizes Jack is right and tries to flee, but the Nightmares take him down and force him into his lair for good, presumably killing him.

Pitch has extremely pale gray skin, dull silver-golden yellow eyes, that resembles a eclipse and sometimes glows like a cat's eyes, jagged, sharp, white, teeth, and glossy, spiky, black hair that curve back towards his head and end in spikes. He wears black robes that has sleeves that blend into his skin and has a slit running up to the middle of his his chest and one on the side. Underneath the robes he wears black pants and black shoes.

Pitch being taken down by his nightmares 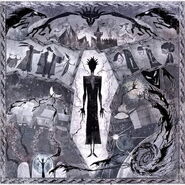 "What a pretty little Nightmare."

"Finally!.... Someone who knows how to have a little fun."

“You don’t have to be alone Jack, I believe in you and I know children will to.”

“I want you to go find the others and tell them the wait is over!” 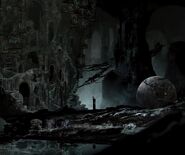 Add a photo to this gallery
Retrieved from "https://dreamworks.fandom.com/wiki/Pitch_Black?oldid=41345"
Community content is available under CC-BY-SA unless otherwise noted.