Barb, also referred to by her full name of Barbara, is the queen of the Rock Trolls and Thrash's daughter. She made her first appearance in the DreamWorks Trolls franchise as the main antagonist of Trolls World Tour, but reformed by the end of the film. She has yet to appear in Trolls: TrollsTopia but was mentioned in the episode TrollsTopia; an image of her was also seen in the supportive short series Trolls Scrapbook Stories.

One of the early trailers showed an earlier version of Barb's model. Her teeth appeared to be like fangs in early trailers, but are more rounded in later clips and the movie itself, and her nose is shaped like an arrow head.

Barb's face is particularly unique among the Trolls. Part of the "The Sound of Silence" scene was meant to test out how she would interact with Poppy and that her assets were working. Her head was initially so large that it caused issues with her face and had to be scaled down by 10%.[1]

Barb is a muddy red-skinned Rock Troll with a bright red mohawk. Her left ear is missing the tip and she has a hoop earring in it; on her other ear are two earrings. She has heavy black makeup around her eyes.

Her red hue and bright hair makes her a lot more distinct from other Rock Trolls, who are mostly colored in greyish tones with either black, white, grey, dark red or blond hair. She's in fact one of the most colorful members of their Tribe. However, her colors seem a bit inconsistent, like Branch's, going between a darker pinkish red/lavender and a muddier red. Similar to Branch as well, her hair is actually short for a Troll of her size.

She has a "rocker" outfit. This includes fishnet stockings with a rip on the right knee, a torn-up white tank top, black leather bottoms, studded bracelets and a silver belt with a skull buckle.

Barb has a fairly large set of eyes compared to most other models of Trolls in the series. This makes her 3D model very expressive, and DreamWorks seems to take advantage of it. She has been showing doing some very expressive facial gestures not even seen in other Trolls thus far. She also claims that she's 1 centimeter taller than Queen Poppy (this would be a lot, since the average height of a Troll is 6 inches). Her body appears to be rather skinny for a Troll, as most are quite plump with visibly large bellies.

She attacked the Techno Trolls in Techno Reef and took the Techno String from them, abducting their entire tribe to Volcano Rock City. She also sent propaganda messages to the other Tribes telling them that she was holding a concert and that each had to bring their String to her.

After taking the Classical Trolls' String from Trollzart at Symphonyville and bringing all Trolls there to Volcano Rock city, Debbie returned from the Pop Trolls. She had been given a makeover by Queen Poppy, to the distress of Barb. Barb is perplexed as the response from Poppy states she wants to be friends with Barb, but she's unconvinced that's possible as friendship takes time. She then goes into a fit of rage after Poppy included a glitter bomb in the message, which proceeded to go off in Barb's face to Riff's horror. Barb is further angered when her father begins to sing the lyrics of the song also included in the message. She manages to bring him back, but the act of messing with her father is the final straw.

Barb called in bounty hunters Chaz, Tresillo and his Reggaeton Trolls, The K-Pop Gang and Yodellers, though the latter didn't show up. She offers to spare the music of and give a small territory to whomever brings her Poppy. Barb is confident that the Yodellers, despite not showing, will be the ones who find Poppy.

Offscreen, and after Poppy, Biggie and Branch left Lonesome Flats, Barb took the Country String from Delta Dawn and the Country Trolls. They too would be taken to Volcano Rock City like the other Trolls.

She then arrived at Vibe City to get the Funk String from King Quincy and Queen Essence of the Funk Trolls. Riff goes on ahead and cuts the power to the lights, leaving the Trolls in darkness. Unknown to Barb, as they attack Poppy, Branch and their new friend Hickory are just leaving, having been sent on their way by Cooper. All Funk Trolls are also gathered up and taken to Volcano Rock City.

At some point, she also attacked Pop Village, taking all Trolls except Guy Diamond, Tiny Diamond, Legsly, Satin and Chenille, who managed to hide in time. The rest of the Pop Trolls were taken to Volcano Rock City.

Barb finally catches Queen Poppy when the Yodellers reveal themselves and Dickory gets Hickory to start yodelling. This attracts Barb's attention, which leads not only to Poppy's capture, but her String taken from her. When Barb meets Poppy, she's not impressed by whom she meets, viewing her as a "Popsqueak" because she's 1 centimeter shorter than her, and realizing she never had anything to worry about the entire time. Through the time Poppy is captured, Barb mocks her, asking her if being her best friend is everything she wants to be.

Poppy is taken to Volcano Rock City, where she's put on display in a cage as the "worst" of the other Tribal leaders. When Barb shows up to the concert, she's joined onstage by Biggie and the Pop Trolls she missed, but their disguises fool her and Barb doesn't click that they aren't Rock Trolls. As Barb goes to play the Ultimate Power Chord on her new guitar, Branch appears in Sheila Balloon along with the K-Pop Gang and Tresillo. He drops a 400-page manual on Barb's head; even though this temporarily stops her, she continues. To protect Poppy, Branch throws himself in front of Barb, and thus becomes the first Rock zombie.

With Branch now a Rock zombie, she converts all other leaders to Rock zombies. When she returns to Poppy, she has escaped her cage but Barb has Branch use his hair to hold her in place while she's hit by the guitar. Poppy appears as though she is converted, and Barb hands Poppy the guitar to convert the remaining leaders' family members King Peppy, Cooper and Prince D to Rock zombies as an act of cruelty against them. However, Poppy reveals that she's not actually a zombie, and used gumdrops to avoid being converted fully. Poppy tells her that everything she's doing is wrong, to which point Riff chimes in by asking how anyone would know that they're cool if everyone was the same. Poppy puts Barb on the spot by telling her that a good queen should listen to her subjects, forcing Barb to have to ignore or consider what Riff just said.

To stop Barb, Poppy smashes the guitar, which frees all the Rock zombies, but also destroys the Strings and all music, turning all Trolls grey in the process. Barb is distraught by the loss of the Strings, and that rock music has been destroyed; she then scornfully puts the blame on Poppy and her tribe for ruining her plans and destroying all music. But soon after, the Funk Princes produce music, and the Trolls start to realize they don't need the Strings anymore. Barb turns to her father, who tells her just to let everyone be what they want to be, including herself. Soon, Barb is the last grey Troll as everyone has joined in with song, adding their own touch to it. Near the end of the song, Barb finally caves in and can't resist, joining in as Poppy hands her her old guitar. As she plays, her hair grows and becomes rainbow-colored, joined shortly by Poppy, whose hair also becomes rainbow-like.

When the song ends, Poppy asks Barb if she finally wants to be friends for real, to which Barb finally accepts. The Trolls went to Pop Village for a victory party, and celebrated being one united nation again.

Queen Barb is shown to be a zealous hard rocker at heart who had a clearly antagonistic view towards the other troll tribes. She had a disdain for their genres of music that she sought to rob them of their Strings and destroy all other kinds of music except for her own. Queen Barb's goal was to unite all trolls, but her idea of unity was under her tribe's music, even if she had to use force and originally didn't care for the other tribes' choices or opinions. Indeed, her plans proved to be far more insidious, as she planned not only to eradicate all other kinds of music except for Rock but to turn the other troll tribes into "Rock Zombies". Although Barb thought her actions were righteous and for the greater good, she casually admitted her goal was basically world domination and called it fun.

She has a red mohawk and red eyes. Her blouse is sleeveless, and her belt is black with a skull in the middle. She does not wear pants or a skirt; instead, she wears black underwear and black fishnets. She doesn't wear shoes. 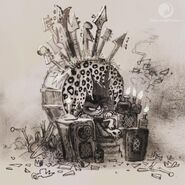 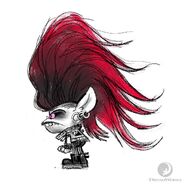 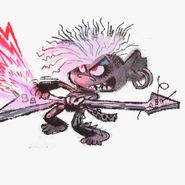 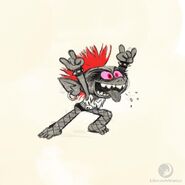 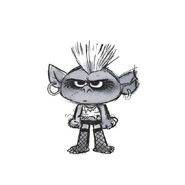 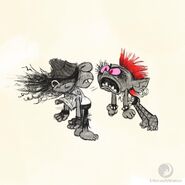 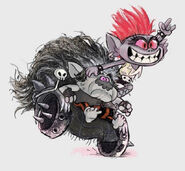 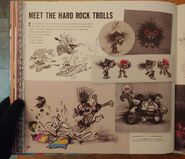 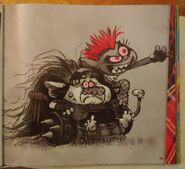