Reese Witherspoon performed the voice of Susan Murphy, aka Ginormica, in Monsters vs. Aliens. The recipient of several accolades, including an Academy Award and a Primetime Emmy Award, she is among the highest-paid actresses in the world, as of 2019. Time magazine named her one of the 100 most influential people in the world in 2006 and 2015.

Born in New Orleans, Louisiana, and raised in Nashville, Tennessee, Witherspoon began her career as a teenager, making her screen debut in The Man in the Moon (1991). She also starred opposite Mark Wahlberg in Fear (1996). Her breakthrough came in 1999 with a supporting role in Cruel Intentions and for her portrayal of Tracy Flick in the black comedy Election. She achieved wide recognition with her role as Elle Woods in the comedy Legally Blonde (2001) and its 2003 sequel, and for her starring roles in the romantic comedy Sweet Home Alabama (2002) and romantic drama Water for Elephants (2011). In 2005, her portrayal of June Carter Cash in the biographical musical film Walk the Line garnered critical acclaim and won her the Academy Award for Best Actress. Her credits also include voice work for the animated films Monsters vs. Aliens (2009) and Sing (2016).

Witherspoon owns the production company Hello Sunshine, under which she produced the thriller Gone Girl and the drama Wild (both 2014). She also starred as Cheryl Strayed in the latter, for which she received a second nomination for the Academy Award for Best Actress. In 2017, she began producing and starring in the HBO drama series Big Little Lies, for which she won the Primetime Emmy Award for Outstanding Limited Series.

Witherspoon also owns a clothing company Draper James, and she is actively involved in children's and women's advocacy organizations. She serves on the board of the Children's Defense Fund (CDF) and was named Global Ambassador of Avon Products in 2007, serving as honorary chair of the charitable Avon Foundation. She received a star on the Hollywood Walk of Fame in 2010. 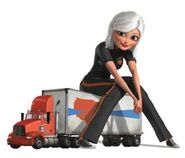 Ginormica from Monsters vs. Aliens
Add a photo to this gallery
Retrieved from "https://dreamworks.fandom.com/wiki/Reese_Witherspoon?oldid=123134"
Community content is available under CC-BY-SA unless otherwise noted.