Rumblewick is a cancelled DreamWorks Animation film based on the book “My Unwilling Witch”.

Rumblewick will follow the adventures of a magician’s rabbit for whom the invitation to learn real magic and train as a witch’s familiar seems like a dream come true! But the dream becomes a nightmare when he discovers he’s really a pawn in a game between rival witches. Having learned the hard way that when something seems too good to be true it probably is, he must outsmart them both to save his fuzzy little hide.

In March 2011, DreamsWorks announced they were producing an animated adaptation of the book My Unwilling Witch (The Rumblewick Letters) that would be titled Rumblewick. Tim Johnson and Jim Herzfeld were slated to write and direct the project. DreamWorks Animation’s Chief Creative Officer, Bill Damaschke states, “The fascinating world of witches and witches’ familiars is perfectly suited for the medium of animation, where anything goes, combined with the magically creative and comedic sensibilities of Tim Johnson and Jim Herzfeld, we look forward to bringing the world of ‘Rumblewick’ to life.” Director Tim Johnson also stated, “The odds are stacked against our main character, a hard-working rabbit. Telling the story of his struggle and triumph is a fantastic journey. I know audiences are going to fall in love with ‘Rumblewick.”[1] In September 2016, Brenda Chapman revealed she had worked on the project, saying, “I helped develop a project called Rumblewick which was based on a children’s book. It was so much fun and it was hard to leave it behind when I did.”[2] 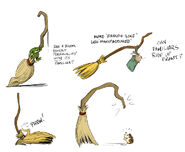