"But one weak link can break the chain of a mighty dynasty!"

Pharaoh Seti I (or simply known as Pharaoh or Seti) is the secondary antagonist from The Prince of Egypt.

Pharaoh Seti I may appear to be a wise and kind old man, but his cruelty brews just beneath the surface. He is vicious and cold, having every Hebrew baby boy killed because they were "only slaves" but have done it out of fear that the Hebrews might one day rise in number and power to start a rebellion that will threaten his legacy.

Pharaoh Seti I is the ruler of Egypt alongside his queen, Tuya. He is the father of Rameses II and the adoptive father of Moses. At the beginning of the film, he ordered his Egyptian soldiers to kill every male Hebrew baby, out of fear that the Hebrews would grow in number and rebel against him. Later, he reprimands Moses and Rameses after a temple is destroyed. He is especially hard on Rameses, who he feels he must prepare the throne for. Moses appeals to Seti's better nature and promises him that Rameses sought only his approval, and would succeed if he only had the opportunity.

Seti later appears at the feast where he appoints Rameses as Prince Regent, by Moses's recommendation. Moses suggests Hotep and Huy pay tribute to their new Prince Regent with a gift. They bring out Tzipporah, a Midian girl captured as a concubine for Rameses, who eagerly gives her to Moses because she is too spirited. After Moses struggles to restrain Tzipporah he jokingly "lets her go" into a small pool behind her. Seti is indifferent to this display, but his wife is ashamed of the behavior.

After Moses is told by Miriam that he is a Hebrew, he has a nightmare of his people being killed. As Moses searches for answers through historical etchings throughout the palace, he finally finds a mosaic of Seti ordering the massacre of infants. Pharaoh finds a devastated Moses and reveals to him that he had the Hebrew infants killed to keep their population in check, and prevent any rebellion against him. He attempts to comfort Moses with a hug and justify his behavior, but when Seti tells Moses that the children were "only slaves", Moses backs away from him in disgust. Seti dies some point after Moses escapes into the desert and passes his throne to Rameses, who surpasses his rule. 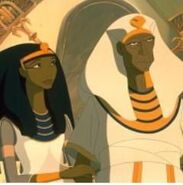 Seti and Moses
Add a photo to this gallery

Retrieved from "https://dreamworks.fandom.com/wiki/Seti_I?oldid=71733"
Community content is available under CC-BY-SA unless otherwise noted.