Shrek the Third (also known as Shrek 3) is a 2007 American computer-animated fantasy comedy film, and the third installment in the Shrek franchise. It was produced by DreamWorks Animation and is the first in the series to be distributed by Paramount Pictures which acquired DreamWorks Pictures in 2006 (the former parent of DWA). It was released in U.S. theaters on May 18, 2007 (exactly six years after the first film).

The film received mixed reviews from critics, but was a box office success, grossing $798 million worldwide against it's $160 million budget.

King Harold (voiced by John Cleese) falls ill and his ogre son-in-law Shrek (voiced by Mike Myers) and daughter Princess Fiona (voiced by Cameron Diaz) are next in line to be King and Queen of Far Far Away. Shrek declines, insisting that an ogre as king is a bad idea and that there has to be someone else for the job. With his final few breaths, the king tells Shrek that there is one other heir who can become the new King of Far Far Away: his nephew, Arthur Pendragon (voiced by Justin Timberlake). After a mournful funeral, Shrek sets out on a quest to bring back the new king, along with Donkey (voiced by Eddie Murphy) and Puss in Boots (voiced Antonio Banderas). As they're sailing off, Fiona runs to the dock and announces to Shrek that she is pregnant and he is going to be a father. Shocked, Shrek begins to have nightmares about his future children on the journey to find Arthur. Donkey tries to comfort him by singing "Cat's in the Cradle" but this only aggravates him more. Donkey tries to convince him that his life will not be ruined but Shrek states that he is worried about ruining his child's life.

The trio's journey soon leads them to Worcestershire Academy, an elite boarding school, where they discover that Arthur ("Artie", as he prefers to be called) is a scrawny 16-year old underachiever picked on by virtually everyone, from the cool kids down to the retainer wearing Dungeons and Dragons geeks. Far removed from the courageous legend his name evokes, Artie stands literally at the bottom of the high school food chain. He is constantly showered with insults, used as a punching bag by the school Jousting Team, led by the obnoxious Lancelot du Lac (voiced by John Krasinski), and cruelly scorned by Guinevere (Latifa Ouaou), the girl he had always loved.

At the school pep rally Shrek tells him he's going to be the new king of Far Far Away. Artie is only too excited to be on his way to the throne, until Donkey and Puss inadvertently scare him by talking about responsibilities of being king. Panicked, Artie tries to take control of the ship and ends up crashing it on an island where they meet Artie's retired wizard teacher, Merlin (voiced by Eric Idle).

Meanwhile, a revenge-lusted Prince Charming (voiced by Rupert Everett) has gone to the Poison Apple Bar, where he encounters a slew of fairy tale villains including Captain Hook (voiced by Ian McShane), the Evil Queen (voiced by Susanne Blakeslee), a Cyclops (voiced by David Edelman), Rumpelstiltskin (voiced by Conrad Vernon), Mabel the Ugly Stepsister (voiced by talk show host Regis Philbin), the Headless Horseman (Conrad Vernon), Stromboli the Puppet Master (Chris Miller), and an assortment of outlaws, black knights, pirates, ents, and witches. Although they initially despise Charming, he persuades them to join him in a fight for their "happily ever after". The villains feel their side of the story has never been told and now is the time to do it.

Charming and the other villains invade the kingdom and pillage for a time before attacking the castle, disrupting Fewsjhiueeiureiureiureioreioeiwoeiwoiowjksjkdjksdknsd tale friends: Gingerbread Man (also voiced by Conrad Vernon), Pinocchio (voiced by Cody Cameron), The Big Bad Wolf (voiced by Aron Warner), and The Three Little Pigs (also voiced by Cameron), Dragon, and Donkey and Dragon's children. Fiona and Lilian (Julie Andrews) try to escape through an underground passage, along with Doris the Ugly Stepsister (voiced by Larry King), Cinderella (voiced by Amy Sedaris), Snow White (voiced by Amy Poehler), Sleeping Beauty (voiced by Cheri Oteri) and Rapunzel (voiced by Maya Rudolph); the ladies are captured, however, when Rapunzel betrays them and leads them into a trap. They learn that she is in love with Charming, who plans to make her his queen once he claims the throne.

Captain Hook and some of his pirates track Shrek and company to Merlin's island, where they attempt to capture Shrek and kill the others. Shrek and Artie tag-team them effectively, however, and send the villains running, but not before Hook mentions Prince and the takeover of Far Far Away. Concerned for his wife and his future children, Shrek urges Artie to return to the safety of Worcestershire; Artie, however, has other ideas. He cons Merlin into coming out of retirement long enough to use his magic and send them all back to Far Far Away; the spell works, but accidentally causes Puss and Donkey to switch bodies because they were touching each other. They find that Charming is bent on revenge against Shrek for 'stealing' his "happily ever after," and plans to kill Shrek in a play later that night. Charming's men arrive shortly, but another clever ruse by Artie tricks the knights into not taking them into custody. They then break into the castle, where play rehearsal and set design are in full swing, and where Charming is becoming not good at rehearsing and is also not good at mock battles, killing two faux Shrek in a row. In Charming's dressing room, Shrek menaces Charming but Charming is able to summon his men, who burst in and take the four captive.

Charming prepares to kill Artie, believing he's the next king. To save Artie's life, Shrek tells Charming that Artie was just a fool to take his place as King of Far Far Away. Charming believes Shrek and decides not to kill him. Artie, who had just been growing to trust Shrek, is crushed by this and runs away. Charming then says to Shrek "You really do have a way with children, Shrek." Donkey and Puss are thrown into the tower with Fiona and the other ladies, where Fiona is growing frustrated with the other princesses and their lack of initiative. Queen Lilian soon grows fed up, and successfully smashes the stone wall of the prison by head butting the walls. While the women launch a rescue mission for Shrek, who is being held captive elsewhere, Donkey and Puss work to free Gingy, Pinocchio, the wolf and pigs, Dragon, and the Dronkeys. As they prepare to enter the castle and join the ladies, they encounter Artie, and Puss and Donkey explain to him that Shrek lied so Charming wouldn't kill him. Artie seems hesitant to believe them.

As the kingdom watches, Charming stages a theatrical performance in which he heroically rides to the rescue of Rapunzel in a (fake) tower and sings, somewhat badly. To Charming's profound annoyance, the chained Shrek wins the audience's support by ridiculing his singing and acting. Just as Charming is about to kill Shrek, Fiona and her friends, along with Puss, Donkey and the Fairy Tale characters, leap onto the stage to confront the villains. It goes awry, however, as the villains largely outnumber the heroes and take them prisoner again. In the nick of time, Artie arrives and convinces the villains to stop and turn over a new leaf, proving himself to possess effective leadership skills. He says something that Shrek told him when they were sitting around a fire at Merlin's island- "Just because some people treat you like a loser, it doesn't mean you are one. The thing that matters most is what you think of yourself. If there's something you really want or someone you really want to be, then the only one standing in your way is you." The villains drop their weapons and release their captives.

Charming, furious at having been thwarted, lunges for him with his sword. Shrek blocks the blow and appears to take it in his own chest, leading Charming to believe he's won; but Charming missed, and the sword is lodged harmlessly under Shrek's arm. Shrek informs Charming that he needs to keep looking for his own happily ever after, because he's not giving up his own. As Shrek pushes Charming aside, Dragon slyly knocks over Rapunzel's tower, which lands on Charming, killing him. Charming's crown is sent rolling across the stage by the impact and is caught by Artie. Shrek tells him that the throne is his if he wants it, but it is his decision to make. Artie lifts the crown toward the audience, who cheer him loudly, then sets it on his own head. While the kingdom celebrates their new monarch, Merlin appears and restores Puss and Donkey to their proper bodies, though their tails were temporarily mismatched.

As Far Far Away is left in the capable hands of young Artie, the move ends as Shrek retires with Fiona to their swamp a few months later, becoming the parents of ogre triplets. 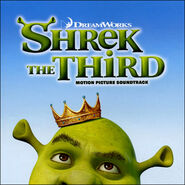 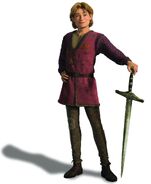 Retrieved from "https://dreamworks.fandom.com/wiki/Shrek_the_Third?oldid=77350"
Community content is available under CC-BY-SA unless otherwise noted.