The Penguins of Madagascar

The Skipper, Petey (by Julien in Rock-A-Bye Birdie)

"You didn't see anything!"

“'Skipper wouldn't care. Plan or no! Fancy equipment or no! He'd never leave a man behind!'”
―Private[src]

Skipper is the leader of the penguins in the Madagascar franchise, and appears in Madagascar, Madagascar: Escape 2 Africa, Madagascar 3: Europe's Most Wanted and the main character of Penguins of Madagascar.

In Madagascar 3: Europe's Most Wanted

In Penguins of Madagascar

Skipper is the oldest penguin, he rejected to the nature, and went to rescue to Private, when he was only an egg, with the help of Kowalski and Rico, they saved the egg, and formed a family. Skipper is the leader of his brothers, he's the plan man. He fight with Classified team, he want to show his team is the best, and don't need to North Wind to save all the penguins in the world, later Skipper has to accept to be a distraction for Dave's squids, and North Wind rescue to Private, but the plan fails, and  the penguins are catched for Dave. Skipper doesn't fight more, he thinks Private has died.

In The Penguins of Madagascar

Throughout the franchise, Skipper is described to be commando, fearless, intelligent, and quick.

Skipper is a table-head-sized adelie penguin with sapphire-blue eyes, orange beak, and a short black tail. 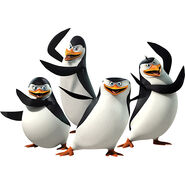 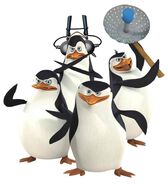 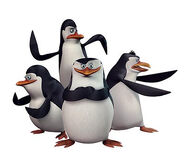 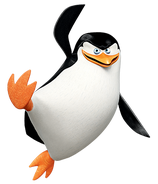 Add a photo to this gallery
Retrieved from "https://dreamworks.fandom.com/wiki/Skipper?oldid=75872"
Community content is available under CC-BY-SA unless otherwise noted.