Dreamworks Animation Wiki
Register
Don't have an account?
Sign In
Advertisement
in: Characters, Character groups, The Prince of Egypt, Joseph: King of Dreams

The Slaves of Egypt are shown in "The Prince of Egypt" and "Joseph: King of Dreams" 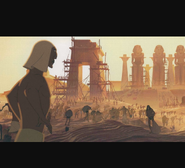 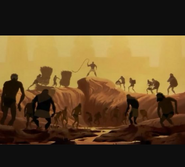 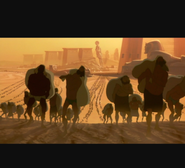 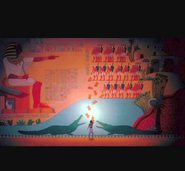 Role in Joseph: King of Dreams

There are not as many slaves as in The Prince of Egypt but there are still at the least hundreds. Joseph is one of these slaves. Slaves are shown to be more house slaves than builders even though some of those can be seen as well.

Role In The Prince of Egypt

The slaves are shown building statues and cities. The Pharaohs have treated them horribly. They are whipped all day. One of the most horrible things was the Massacre of the Slave Children. One day Moses is walking through the new building area and see's an old slave being beaten by an Egyptian. Upon seeing this Moses kills the Egyptian and flees from Egypt.  God see's there suffering and decides to free them. Moses goes to his former step-brother Ramses II to let his people go. God sends all kinds of Plagues to make the Pharaoh let the slaves go. At the end of the movie over 600,000 slaves are seen leaving Egypt singing and cheering and praising God for setting them free.

Seti I feared that the slaves would grow to numerous and rise against him. He ordered his army to kill every infant male belonging to the slaves. Most of the children were thrown into the Nile and fed to Crocodiles. The Masscre is depicted on a wall in Ramses's palace. When Moses discovered what Seti had done and how he almost got killed himself he asked his father, "Father please tell me you didn't do this". Of course Seti didn't care and simply said, "They were only slaves".

The slaves believe in one God even though many of there ancestors were Idol worshipers. God loves the slaves and calls them his people.