View source
watch 01:33
Wiki Targeted (Entertainment)
Do you like this video?
Play Sound

Sonya is a character in Madagascar 3: Europe's Most Wanted.

Sonya is a female grizzly bear. She wears a pink tutu, has a bow in her hair, and rides on a tricycle. Strangely, she does not really talk in English, but instead communicates by growling, like most bears do. During the film, she breaks her tricycle which is replaced by a motorcycle. Soon she starts a relationship with Julien, who is smitten with her. She enjoys doing her bike riding and becomes upset when it is ruined.

When King Julien, Maurice, and Mort are on the train, they get scared by all the torn-up stuff. Soon, they see red eyes and become more frightened. The eyes are revealed to be Sonya's, whom Julien instantly falls in love with. He woos her with a fish before she eats Julien whole and pulls him out, all covered in spit. He compliments Sonya, but she just puts up with him.

She and Julien go on a tour of Rome, where he proposes to her after secretly stealing the pope's ring. Soon, Sonya breaks her tricycle, but Julien replaces it with a motorcycle (which he pays for using the pope's ring).

When Alex says they need to change up the acts, she cheers by roaring. During the circus act, she and Julien perform stunts on her motorcycle. Soon, Alex and the gang decide to go back to the zoo. Julien decides to go with them, leaving behind a heartbroken Sonya.

When the animals get to the zoo, they're ambushed and darted. King Julien manages to go back to the circus and tells Sonya that he doesn't want to be king anymore and would rather be with her. During the "Afro-Circus" scene, she and Julien are dancing together.

King Julien & Sonya in their motorcycle act at the circus 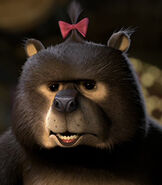