Spike is an antagonist of Flushed Away.

Despite his comical quirks, Spike has a strong desire to be treated like a vicious hitman, however this is undercut by his well-meaning partner and general incompetence. Whilst in some instances he has shown to be genuinely sadistic, Spike over-exaggerates his supposedly villainous nature with evil laughs and puns. Though he fears The Toad, Spike also wants to boost his bosses opinion of him and even shows a desire to be friends with him as can be witnessed during his excitement when he thought The Toad wanted to watch football with Whitey and himself.

Spike's constant twitching and homicidal tendencies imply that he has gone insane during his time trapped in the sewer.

Spike with the persuader

Spike flies quite suddenly off the boat, screaming like a girl

Spike getting defeated by a bottle 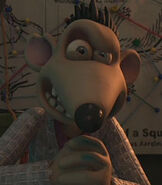 Spike finds out where Roddy and Rita are.
Add a photo to this gallery
Retrieved from "https://dreamworks.fandom.com/wiki/Spike_(Flushed_Away)?oldid=123375"
Community content is available under CC-BY-SA unless otherwise noted.